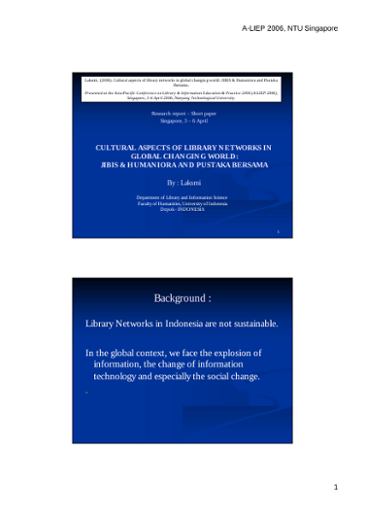 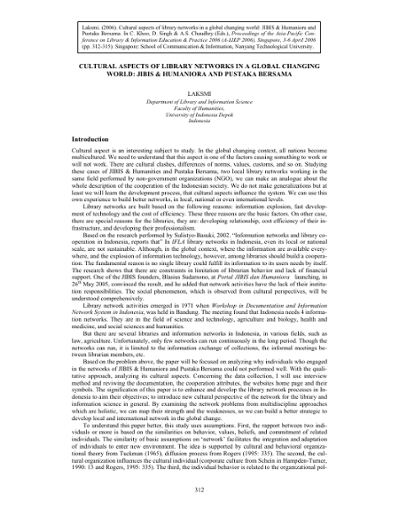 Cultural aspect is an interesting subject to study. In the global changing context, all nations become multicultured. We need to understand that this aspect is one of the factors causing something to work or will not work. There are cultural clashes, differences of norms, values, customs, and so on. Studying these cases of JIBIS & Humanities and Pustaka Bersama, two local library networks working in the same field performed by non-government organizations (NGO), we can make an analogue about the whole description of the cooperation of the Indonesian society. We do not make generalizations but at least we will learn the development process, that cultural aspects influence the system. We can use this own experience to build better networks, in local, national or even international levels. Library networks are built based on the following reasons: information explosion, fast develop-ment of technology and the cost of efficiency. These three reasons are the basic factors. On other case, there are special reasons for the libraries, they are: developing relationship, cost efficiency of their in-frastructure, and developing their professionalism. Based on the research performed by Sulistyo-Basuki, 2002. â Information networks and library co-operation in Indonesia, reports thatâ In IFLA library networks in Indonesia, even its local or national scale, are not sustainable. Although, in the global context, where the information are available every-where, and the explosion of information technology, however, among libraries should build a coopera-tion. The fundamental reason is no single library could fulfill its information to its users needs by itself. The research shows that there are constraints in limitation of librarian behavior and lack of financial support. One of the JIBIS founders, Blasius Sudarsono, at Portal JIBIS dan Humaniora launching, in 26th May 2005, convinced the result, and he added that network activities have the lack of their institu-tion responsibilities. The social phenomenon, which is observed from cultural perspectives, will be understood comprehensively. Library network activities emerged in 1971 when Workshop in Documentation and Information Network System in Indonesia, was held in Bandung. The meeting found that Indonesia needs 4 informa-tion networks. They are in the field of science and technology, agriculture and biology, health and medicine, and social sciences and humanities. But there are several libraries and information networks in Indonesia, in various fields, such as law, agriculture. Unfortunately, only few networks can run continuously in the long period. Though the networks can run, it is limited to the information exchange of collections, the informal meetings be-tween librarian members, etc. Based on the problem above, the paper will be focused on analyzing why individuals who engaged in the networks of JIBIS & Humaniora and Pustaka Bersama could not performed well. With the quali-tative approach, analyzing its cultural aspects. Concerning the data collection, I will use interview method and reviwing the documentation, the cooperation attributes, the websites home page and their symbols. The signification of this paper is to enhance and develop the library network processes in In-donesia to aim their objectives; to introduce new cultural perspective of the network for the library and information science in general. By examining the network problems from multidiscipline approaches which are holistic, we can map their strength and the weaknesses, so we can build a better strategic to develop local and international network in the global change. To understand this paper better, this study uses assumptions. First, the rapport between two indi-viduals or more is based on the similarities on behavior, values, beliefs, and commitment of related individuals. The similarity of basic assumptions on â networkâ facilitates the integration and adaptation of individuals to enter new environment. The idea is supported by cultural and behavioral organiza-tional theory from Tuckman (1965), diffusion process from Rogers (1995: 335). The second, the cul-tural organization influences the cultural individual (corporate culture from Schein in Hampden-Turner, 1990: 13 and Rogers, 1995: 335). The third, the individual behavior is related to the organizational pol-icy, such as financial policy, or other interest. If there are such conflicts, individuals may sustain the network. These assumptions are used as a guide to collect data as social phenomena and used in doing the study stages. Data collected from interviews and observations are interpreted based on the cultural concepts.