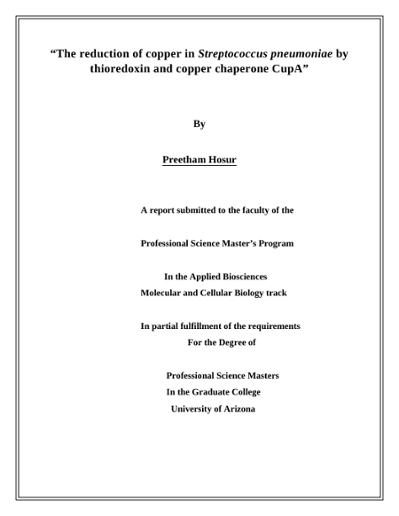 Hosur, Preetham (The University of Arizona., 2018) 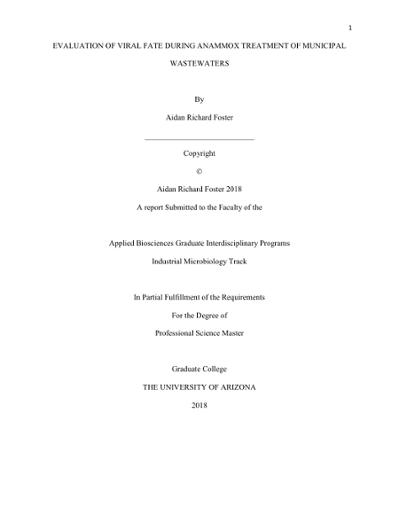 EVALUATION OF VIRAL FATE DURING ANAMMOX TREATMENT OF MUNICIPAL WASTEWATERS

Foster, Aidan Richard (The University of Arizona., 2018)
Conventional secondary treatment of municipal wastewater designed to achieve biological nutrient removal typically utilize methods of nitrification-denitrification to convert ammonia to nitrogen gas to reduce the environmental impact of human wastewater streams. However, this process requires high energy inputs while also producing greenhouse gases. An alternative nitrogen treatment process is possible that treats nitrogen through anaerobic ammonia oxidation (Anammox) which has been reported to have numerous benefits over conventional treatment. While the effect of conventional secondary treatment has been evaluated for its effects on human enteric viruses, the effect of anammox systems on these microbes is undocumented. Through a joint venture between the University of Arizona, Pima County Wastewater and the Water and Energy Sustainability Technology (WEST) center, two different anammox reactors will be established and assessed for their effects on viral fate. Three human enteric viruses (adenovirus, enterovirus, and reovirus) will be monitored as well as evaluating possible indicator organisms to monitor human enteric virus in anammox systems. 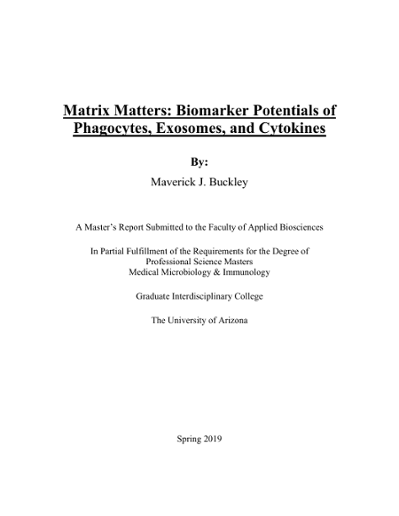 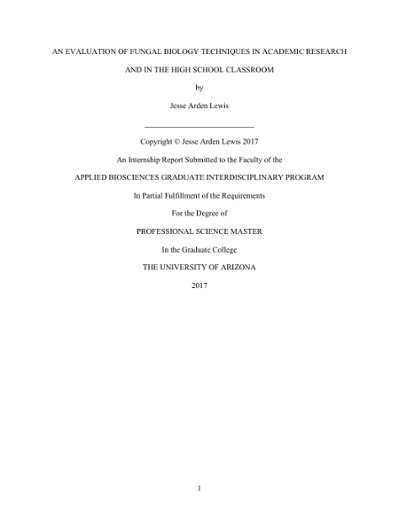 Lewis, Jesse Arden (The University of Arizona., 2017)
Fungal gene replacement research This report summarizes how a diverse internship experience provided a working knowledge of the basic techniques required to use fungi in a laboratory setting, and evaluates the usefulness of translating those techniques into the high school classroom. To gain and demonstrate an understanding of fungal biology, a project was undertaken in Dr. Marc Orbach’s laboratory with the goal of creating a mutant strain of Magnaporthe oryzae lacking the putative virulence gene CPS1. An attempt was made to establish stable knockout mutants of M. oryzae strain Guy11 through Agrobacterium tumefaciens mediated transformation (ATMT) and protoplast transformation techniques (Betts, 2007). A gene encoding hygromycin B phosphotransferase (Hph) which provides resistance to hygromycin was used in both cases to attempt to replace the target M. oryzae CPS1 DNA. Putative transformants were analyzed by PCR and agarose gel electrophoresis to compare observations to expected results. Hygromycin resistant transformed strains were obtained using two different M. oryzae strains, Guy11 wild type and Guy11Δku80 mutant lacking the gene essential for Non-homologous end joining DNA recombination. Complementary to the PCR and electrophoresis analysis, Southern blot analysis was employed to examine the CPS1 locus in the putative transformants. Education outreach To demonstrate the effectiveness of fungal biology techniques in the classroom, an experiment was designed to convey Alexander Fleming’s discovery of penicillin. An activity was designed to communicate the variability of antibiotic sensitivity among bacterial species to high school students. Classroom resources mandate a simple experimental design to communicate scientific concepts to high school students. A protocol was developed and optimized to demonstrate the interaction between Penicillium chrysogenum and three different species of bacteria, using materials that are readily available to high school classrooms. Classrooms with student populations who are predominantly underrepresented in higher education and who are from economically depressed areas became the model for resource availability so that the protocol could be used by students from a wide range of backgrounds. For the classroom activity, Penicillium chrysogenum conidia were harvested from potato dextrose agar (PDA) media and quantified by optical density using a spectrophotometer before culture flasks of liquid media were inoculated. After several days of fungal growth, cultures of Staphylococcus epidermidis, Micrococcus luteus, and Enterobacter aerogenes were inoculated into separate cultures of P. chrysogenum as well as sterile liquid media in culture flasks. After 24 hrs the cultures were filtered to separate fungi from bacteria and the growth of the bacteria was quantified by optical density and compared across cultures. The classroom activity, titled “Penicillium Antibiotic Effect”, has been added to the BIOTECH Project website (http://biotech.bio5.org/biotech_lab_activities/penicillium) and an article was written and submitted to the American Biology Teacher journal of the National Association of Biology Teachers. 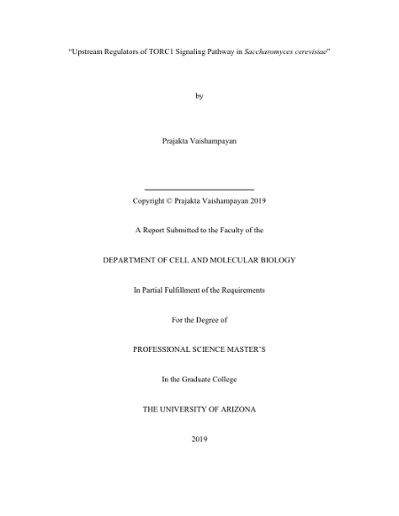 Vaishampayan, Prajakta (The University of Arizona., 2019)
Many nutrients including glucose, phosphate and amino acids regulate TORC1 activity and when the cells are in stress or starvation conditions, TORC1 activity is inhibited. It remains unclear how this happens. So, we are interested in mapping the signaling system that talks to TORC1 to ultimately understand how the complex integrates signals to control growth in stress conditions. In this project, the response of TORC1 under nitrogen, glucose and phosphate starvation conditions was checked in strains lacking one or more stress signaling pathway proteins to identify the mechanism which leads to inhibition of TORC1 in stress conditions. 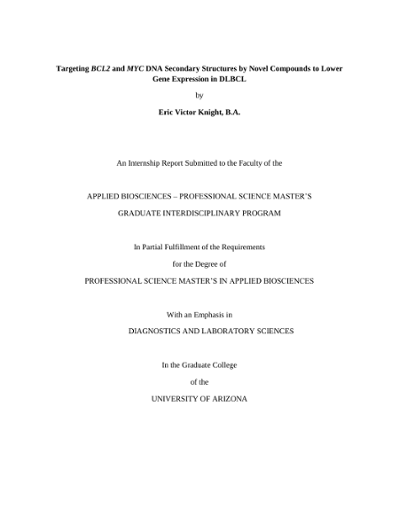 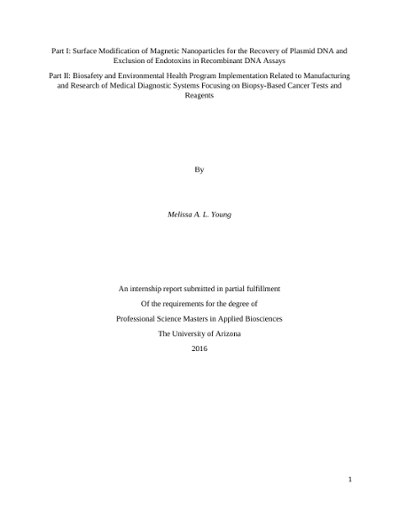 Part I: Surface Modification of Magnetic Nanoparticles for the Recovery of Plasmid DNA and Exclusion of Endotoxins in Recombinant DNA Assays; Part II: Biosafety and Environmental Health Program Implementation Related to Manufacturing and Research of Medical Diagnostic Systems Focusing on Biopsy-Based Cancer Tests and Reagents

Young, Melissa A. L. (The University of Arizona., 2016)
Part II: Biosafety and Environmental Health Program Implementation Related to Manufacturing and Research of Medical Diagnostic Systems Focusing on Biopsy-Based Cancer Tests and Reagents / Abstract: Occupational and environmental health and safety are essential factors in the public health field. One’s occupation is the central activity for adults, a means to earn an income, and a center for the advancement of society. Safety in the workplace not only provides a secure environment for the employee, but it also reduces costs for the employer over time by diminishing work related injuries, illnesses and lost work time and production delays. Occupational health in turn plays a unique and important part in the environmental health as well. With improved health and safety in a workplace, workers are more conscience of how the hazardous material they dispose of affects themselves as well as their environmental surroundings. It is our duty as inhabitants of this planet, to protect our environmental surrounds. By understanding our ecological footprint contributed by daily work activities we can begin to improve our environmental health. In order to accomplish these goals health and safety programs specific to the occupation and local environmental concerns are necessary. Ventana Medical Systems Inc, is a cancer diagnostics company that specializes in the development and manufacture of primary stain, special stain, Immunohistochemistry (IHC), and in situ hybridization (ISH) staining platforms and reagents. These reagents and platforms are used in hospitals, clinical labs, and research facilities all over the world to diagnose and determine the proper treatment for specific cancers. With such high stakes resting on the quality and production of reagents and staining platforms, employee health and safety is crucial to maintain production of reliable products to customers. In response the Safety, Health and Environmental (SHE) department at Ventana is currently employing several different occupational and environmental health programs. Thus for my internship project I participated in compiling waste profiles, performing laboratory audits/walk-throughs, assisting with waste water and storm water profiling, and participating in risk assessments by attending risk assessment meetings and providing feedback. By setting these improved programs into place, SHE at Ventana can ensure that employees become acclimated to safety and health guidelines. Ventana Medical Systems Inc., has already shown progress in reducing waste by recycling, and increasing productivity by reducing employee injury in incident prone work areas. These programs will allow employees to conduct their research and manufacturing in safer and healthier work environments, as well as ensure that the company maintains its goals of improving the impact of business on the environment. 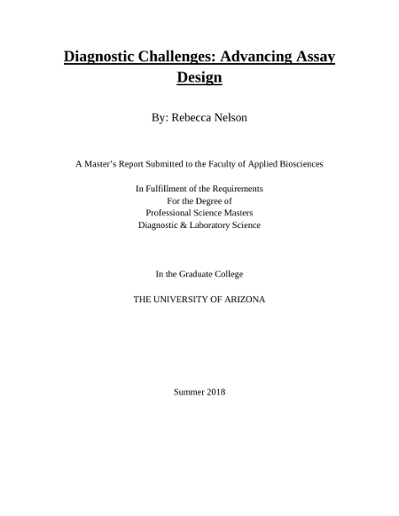 Nelson, Rebecca (The University of Arizona., 2018)
Prologue: A unique aspect of the Professional Science Masters Applied Bioscience program is to immerse future graduates into the fields of scientific research inclusive of both business and basic science. At the culmination of the program, an 8 credit hour internship requirement proved to be an invaluable opportunity for me to experience a broad range of scientific inquiry. Throughout the duration of the internship, I was able to learn and master laboratory techniques, adhere to federal and state regulations, practice communicating my results, and ultimately be a contributing member of a collaborative team. In return, I aided my supervisors by completing projects and assigned tasks that was of great value and/or interest to the company. Internships can be done at one company or split to be completed at two separate industries. I was fortunate enough to be able to experience two companies, one focusing more on research and assay development (MSDx) and the other focusing on diagnostic tools to add to their testing services (Pharos Dx). The first internship was with MSDx, Inc., a research company aiming to provide diagnostic solutions for neurodegenerative disorders. The researchers were interested in moving a first generation assay to a second generation assay for greater specificity in detecting tau, a protein which is primarily located within the brain and a proven marker for brain degeneration [10, 11]. Their first generation assay, an indirect ELISA, is compatible with their current anti-tau monoclonal and polyclonal antibodies. My responsibilities were to search for additional anti-tau antibodies that could be used as pairs in a sandwich assay and would detect an epitope within the tau amino acid sequence of interest (c-terminus of the protein). At the conclusion of the internship, I created a table of commercially available antibodies and provided it to the company (table 1 within the paper). I was also able to demonstrate how the first generation assay worked to model the first steps that would be taken when testing a new antibody for assay development (figure 4). The second internship took place at Pharos Dx., which is a diagnostic company utilizing liquid-chromatography mass-spectrometry as part of their testing services. Pharos Dx was looking to offer microsampling devices to their clientele as it would help veterinarians to easily collect samples from animals. Microsampling has a disadvantage with the hematocrit where an unknown volume of blood would affect the overall spreading and homogeneity of the sample across the filter paper [43, 46]. My responsibility during this internship was to research the various microsampling tools currently out on the market. With the amount of published papers available, my objective was to sort through the validated and completed experiments to make a recommendation to Pharos Dx regarding the microsampling device to pursue and explore further. At the conclusion of the internship, I summarized my findings (presented within this paper) and suggested Pharos Dx begin confirmatory testing of using a potassium based algorithm to remove the hematocrit bias associated with dried blood spot cards [52, 64]. In conclusion, each internship was a full experience of new content and laboratory techniques. I gained a greater appreciation for what scientists have to go through to create commercial products to be used in disease detection and monitor overall health. With MSDx, Inc., I was able to learn a substantial amount about brain disorders and the recent findings (2015) of lymphatic vessels in the brain [5, 6]. With Pharos Dx., even though the focus was researching microsampling for a diagnostic tool, I learned more about the regulatory side of research and how to trust published results based on the validation of the procedures that were run. It was my goal that I would be able to contribute tangible products for these companies, as both companies truly helped me grow as a scientist.