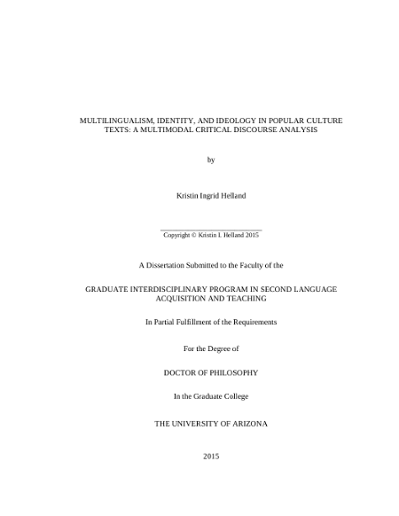 Helland, Kristin Ingrid (The University of Arizona., 2015)
In recent years a paradigm shift has occurred in second language acquisition and applied linguistics, moving away from a monolingual approach toward a multilingual one that emphasizes the social, political, and historical contexts of languages in contact. Scholarly recognition of multilingualism has led to research studies focusing on multilingual practices such as code-switching in a range of contexts and genres, e.g., film, hip hop, advertising and social networking sites. These studies reflect a shift in research focus from spontaneous speech to scripted texts, and also from the communicative to the symbolic function of code-switching, as seen in studies of Mock Spanish (Hill, 1998) and linguistic fetishism (Kelly-Homes, 2005). The emphasis on the symbolic and ideational is reflected in an increased interest in multimodality and how language interacts with other semiotic codes (e.g., visual imagery, gesture, dress, body ornamentation, and soundtrack) to convey messages of identity and ideology. Recently, several scholars have called for an expanded framework that would incorporate systematic multimodal analysis in studies of multilingualism in popular culture texts (Androutsopoulos, 2012; Stamou, 2014). The present study responds to this call with a genre-based project incorporating a sociolinguistic and multimodal studies approach with critical discourse analysis and genre analysis, which focuses on a comparison of three different types of popular culture texts: 1) a bilingual English-Spanish film from the U.S. (From Prada to Nada), 2) multilingual music videos from Japan (by the artist Mona AKA Sad Girl), and 3) a bilingual television ad from the U.S. (by Taco Bell). The study adapts and extends O'Halloran et al.'s (2011) model of multimodal critical discourse analysis based on social semiotic theory (Kress and van Leeuwen, 2001) to examine how semiotic codes work together to either reinforce or challenge racial, linguistic, gender, and age-related stereotypes and dominant discourses. This model draws from Bakhtin's notion of heteroglossia and intertextuality and Barthes' concept of myth to examine how language and other multimodal features at the micro-level interact with macro-level discourses to create multi-layered meanings. The dissertation also explores how creators of popular culture texts utilize intertextual references to convey meaning through multiple semiotic codes and how texts become re-contextualized as they circulate globally. Taking into account the multiplicity of readings by diverse audiences, which in part depend on viewers' familiarity with intertextual references, this study addresses issues of reception by analyzing re-mediatized discussions about the texts in online comments, reviews, and articles, in order to gain added insights into the variety of ways the texts are interpreted. The findings of this study show how multilingual, multimodal features in popular culture texts cross genre, linguistic, national, and ethnic boundaries by means of global (re)circulation and local (re)contextualization through the agency of re-mediatization, which is made possible because of internet technology. In the process of recirculation these features become "semiotic metaphors" (O'Halloran 1999, 2008), representing discourses of identity and ideology which are in turn re-interpreted, influencing the way language, visual images and auditory modes are used to create new meanings in different contexts. By showing how semiotic metaphors cross many different types of borders, this study helps to account for emerging local-global hybrid identities and linguistic hybridization and supports previous calls for a more localized perspective of transnationalism (Lam & Warriner, 2012). Finally, it substantiates the need to move beyond traditional monolingual and monomodal notions of language and culture toward a more multi-dimensional view that transcends traditional boundaries.

Critical Semiotic Order Theory: The Misconstruction of Arab and Muslim Identities and Voices in Hollywood Movies

Al Balushi, Iqbal Abdul Qadir (The University of Arizona., 2014)
In the age of multi-literacies, contemporary theories and devices are required to decipher increasingly complicated challenges which are presented by the digital technological revolution. Some of the existing approaches and frameworks of could inspire us but are not well equipped to address the complexities and multi-perspectives of the eccentric challenges that scholars face on diverse issues. Therefore, I present the critical semiotic order theory (CSOT) as a new eclectic theory to analyze discourse and moving and still images critically, semiotically and using systematic orders simultaneously.The theory has four hypotheses: 1) the positive and negative order hypothesis; 2) the zero value order hypothesis; 3) the chaos order hypothesis; 4) the semiotic indices order hypothesis. The theory was applied to three movies, and was successful in unearthing numerous perceptions and some were microscopic semiotic communicative indices and related them to polycentric Occidental ideologies.Hollywood has made over a thousand movies negatively stereotyping (NS) Arab/Muslim identities and voices (AMIVs) and the images in the vast majority are demeaning (Shaheen, 2009: 2). This research sets to find out whether the misconstruction of Arab/Muslim identities and voices (AMIVs) in three Hollywood movies are ordered, patterned, systematic, and related to ideologies and agendas of polycentric Western individuals, agencies, institutions and governments.The three movies showcase dozens of discursive microscopic critical semiotic orders and patterns of NS of AMIVs in discourse and still and moving image such as being: angry, dangerous, dirty, primitive, uncivilized, dishonest, cowards, fanatics, slaves, extremists, savages, liars, sorceress, killers, terrorists, mad dogs, child terrorists, suicide bombers, etc. The racism touches Arab/Muslims' (A/Ms) characteristics, personalities, races, cultures, traditions, histories, stories, folklores, costumes, images, etc.The analysis showed that there was a systematic pattern and order of NS of AMIVs within and across the three movies, and the NS is related to ideologies and agendas of polycentric Western individuals, agencies, institutions and governments for socio-cultural, socio-economic and socio-political investments in a vast complex web that some of it can go to hundreds of years in making. Nowadays, NS of AMIVs is done by many Westerners for various ideological agendas and investments, and they have appointed themselves as judge, jury and prosecutor.