Nineteenth-Century Travel Writing and the Nuclearization of the American Southwest: A Discourse Analytic Approach to W.W.H. Davis's El Gringo New Mexico and Her People 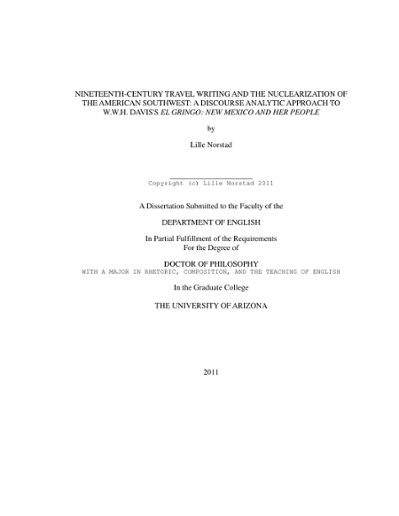 Travel narratives of the nineteenth century frequently became vehicles for colonialist discourse, strategically representing the Other(s) in order to justify their subjugation, and their land as a site of opportunity. W.W.H. Davis's travel narrative, El Gringo: New Mexico and Her People (1857) was no exception. This dissertation begins by arguing that we need to read El Gringo as a rhetorical text, that Davis's objective in portraying both the land and the people was to represent New Mexico as inherently "disponible," a term used by Mary Louise Pratt to indicate "available for capitalist improvement." Working from this assertion, I use the methodology of the Discourse-Historical Approach developed by Martin Reisigl and Ruth Wodak to explore the development of racialized constructions of New Mexican identity, their ideological relationship to "disponibility," and how these constructs have been reproduced intertextually through discourse. As accepted beliefs concerning the state, they continue to be recontextualized in new situations, notably to justify the disproportionate location of nuclear weapons-related industries, waste, and research activities within the state. Just as Davis and other earlier writers had used words such as "barren," "isolated," "unpopulated," and "wasteland," to rationalize the US presence, US government officials used these very terms a century later to argue that New Mexico was the location-of-choice for building and testing the first nuclear weapon. I argue that a direct discursive connection exists between the US colonization of New Mexico in 1846 and its nuclear colonization in 1942. As part of the ongoing legacy of colonialism, the language used to justify New Mexico's nuclear burden has marginalized the state's original inhabitants, diminishing their land rights and creating situations of environmental racism, such as the Church Rock incident on the Navajo Reservation. In some cases, Native Americans and Nuevomexicanos were "disappeared" from the discourse entirely, as with several Pueblo communities living adjacent to the site of the Manhattan Project. Dialectically, the nuclear colonization of New Mexico has transformed Manifest Destiny as well, reconfiguring its initial purpose to ensure US hegemony internally, to the ability of the US to maintain nuclear hegemony worldwide.