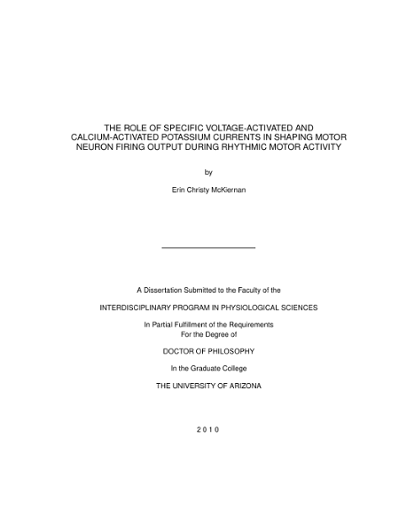 Rhythmic muscle contractions underlie a number of behaviors, such as respiration, ingestion, and locomotion, which are necessary for survival. Though in many cases motor neurons (MNs) themselves do not generate the basic motor rhythm, research suggests that the intrinsic properties of MNs may shape the timing of the final motor output. In particular, potassium (K⁺) currents can affect MN excitability and firing in a number of ways, including action potential repolarization, firing frequency, dendritic integration, repetitive firing, and burst termination. The roles played by K⁺ currents, therefore, make them ideal candidates to shape MN firing output during rhythmic activity. Just how crucial MN K⁺ currents are in shaping rhythmic motor output, which currents are crucial and what genes are responsible, and how these currents affect MN firing are areas of active investigation. Unfortunately, many previous studies attempting to answer such questions have relied on manipulations that affect large, and often unidentified, populations of neurons simultaneously. To effectively determine the role of MN currents in shaping rhythmic motor output we must target manipulations of specific ion channels to MNs. We used the Drosophila larval model system because the genetic tools available allow us to do just that. We targeted manipulations of specific calcium (Ca²⁺)-activated and voltageactivated K⁺ currents to identified populations of MNs. We hypothesized that MNs are not simply followers of network drive, but that MN firing output is further shaped during rhythmic motor activity by these K⁺ currents. Overall, our results show that though aspects of the motor output changed, such as burst duration, the system was remarkably robust in the face of K⁺ channel manipulations. Larvae expressing manipulations of the Ca²⁺-activated K⁺ channel, Slowpoke, and voltage-gated K⁺ channels Shal or eag/Shaker, continued to produce rhythmic motor output. Most manipulations had the strongest effect when expressed in cells other than just MNs, while restricting expression to smaller subsets of cells suggested that many of the effects were not intrinsic to the MNs. Even those manipulations which resulted in the strongest effects only changed burst or cycle durations by a few seconds, and did not affect the incidence or regularity of the rhythm. These results suggest that either these MN K⁺ currents minimally shape rhythmic motor output in this system, or compensation for the loss of K⁺ currents occurred. In sum, this work sheds light on the role of K⁺ currents in MNs during rhythmic activity, and points to a number of future directions examining the role of compensation in maintaining crucial rhythmic motor behaviors.