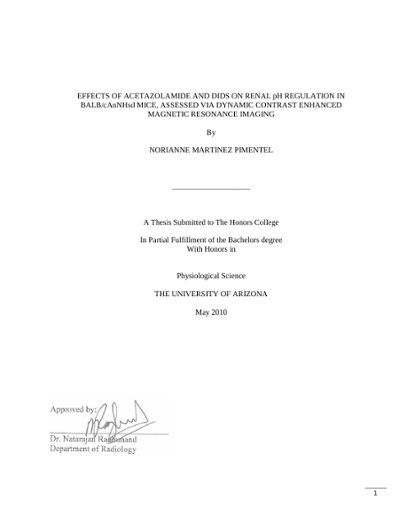 Aquaporin (AQP) water channels are critical components of the urine concentrating mechanism in mammalian kidneys, and to-date, seven homologs of this channel have been found to play a role in renal physiology. In particular, Aquaporin-1 (AQP1) is located along the proximal tubule (PT), thin descending limb of the loop of Henle (tDLLH), and descending vasa recta (DVR). Also important in the kidneys are α- and β-intercalated cells (ICs), which regulate pH and are found in the distal tubule (DT) and collecting duct (CD). In the AQP1-knockout mouse model, CDs have been shown to demonstrate increased expression of α-ICs, suggesting compensatory increases in bicarbonate reabsorption and proton secretion. Two important pH modulating mechanisms in α-ICs are the carbonic anhydrase catalyzed interconversion of carbon dioxide and water to bicarbonate, and luminal and abluminal chloride/bicarbonate antiporter activity. The purpose of this study is to investigate differences in renal pH regulation between wild-type (WT) and AQP1-knockout (KO) mice. In particular, we aim to measure the r1 MRI relaxivities of Gd-DTPA, Gd-DOTA-4AmP, and Gd.3a at 7 Tesla in vitro, employ Dynamic Contrast-Enhanced Magnetic Resonance Imaging (DCE-MRI) in vivo in order to generate co-registered maps of renal functional parameters in wild-type and AQP1-knockout mice, and investigate the pharmacodynamics of acetazolamide and DIDS in wild-type and AQP1-knockout mice. We have compared wild-type and AQP1-knockout mice treated with saline, acetazolamide (a carbonic 9 anhydrase inhibitor), 4,4-diisothiocyano stilbene-2,2-disulfonic acid (DIDS, a Cl-/HCO3- exchange inhibitor), and untreated mice. We have imaged tissue pH in these mice by DCE-MRI using standard and pH-sensitive MRI contrast agents. Enhancement in these images varies based on both tissue pH and local concentration of the contrast agent. In order to generate in vivo pH maps of mice, a previously published dual-bolus technique using two contrast agents, one pH-insensitive and one pH-sensitive, was employed. Three MRI contrast agents, Gd-DTPA, Gd-DOTA-4AmP and Gd.3a, of which the latter two are pH-sensitive, were utilized. The pH-insensitive Gd-DTPA has renal pharmacokinetics comparable to the other gadolinium chelates, and thus, was utilized as a marker of the contribution of local concentration to image enhancement in the images acquired using the pH-sensitive agents. pH measurements of wild-type animals under baseline and drug-treated conditions will be presented, the applicability of a two-compartment model for describing renal physiology will be assessed, and hypotheses for relating differences in pH regulation to functional consequences of AQP1 deficiency will be discussed.