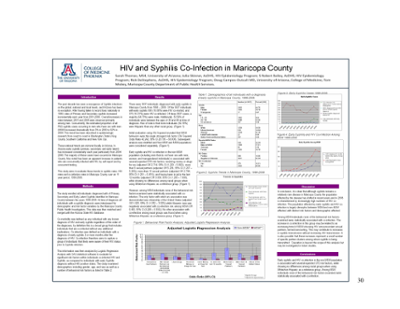 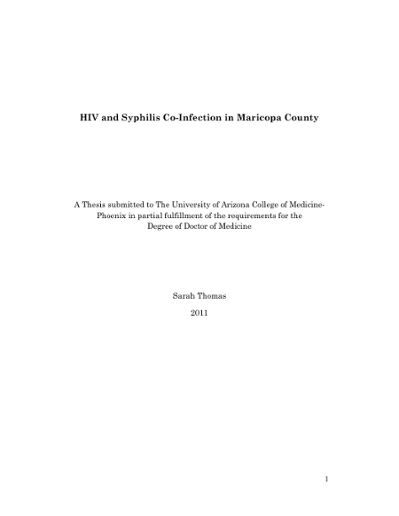 BACKGROUND: The past decade has seen a resurgence of Syphilis infections on the global, national and local levels, and Arizona has been no exception. After having fallen to record lows nationally in 1999, rates of Primary and Secondary (P&S) syphilis increased incrementally each year from 2001-2008 [5] [16]. Overall increases in rates between 2001 and 2008 were observed primarily among men [5]. Concurrently, the estimated proportion of all P&S syphilis cases occurring in men nationally who have sex with men (MSM) increased dramatically from 5% in 2000 to 62% in 2004 [15]. This trend has been described in epidemiologic research from coast to coast in Washington State’s King County, Southern California and New York City [9] [10] [11]. These national trends are mirrored locally in Arizona. In Arizona early syphilis (primary, secondary and early latent) has increased from 2004-2008 [19]. The majority of these cases have occurred in Maricopa County. Also noted has been an apparent increase in patients who are concurrently infected with HIV, by self report and testing. OBJECTIVES: This study aims to evaluate these trends in syphilis rates, HIV rates and co-infection rates in Maricopa County over an 11 year period. METHODS: The study enrolled all individuals diagnosed with of Primary, Secondary and Early Latent Syphilis identified in Maricopa County between the years 1998-2008. At time of diagnosis all individuals with a syphilis diagnosis were interviewed for demographic and risk factor variables by the Maricopa County Public Health Investigators. This data was then matched and merged with the Arizona State HIV database to identify individuals with confirmed HIV positive status and early syphilis diagnosis. All personal identifiers were removed once the data was merged. Co-morbidity was defined as any individual with any known diagnosis of HIV and early syphilis regardless of the order of the diagnoses. Co-infection was defined as individuals with a diagnosis of early syphilis 3 or more months after the diagnosis of HIV. This information was then analyzed using SAS statistical software. Logistic regression analysis evaluated for significant risk factors within individuals co-infected HIV and Syphilis, as compared to individuals with early Syphilis diagnosis without HIV positive status. The study examined demographics including gender, age, and race as well as behavioral risk factors; men 5 who have sex with men, meeting sex partners on the internet, having anonymous sex partners, number of sexual partners in the past year, citizenship status, drug use, receiving money or drugs for sex, giving money or drugs for sex, and incarceration within the past year. RESULTS: Initial evaluation using Chi Squared analysis revealed that among all factors examined, MSM behavior was most strongly associated with HIV co-infection (Chi Squared Odds Ratio 42.242, 95% CI 29.736 – 60.008). Subsequent analysis was stratified and Non-MSM and MSM populations were considered separately. Early syphilis and HIV co-infection in the non-MSM population (including men that do not have sex with men, women, and transgendered individuals) is associated with several expected STD risk factors; receiving money or drugs for sex (adjusted OR 2.714, 95% CI (1.229 – 5.992)), more than 5 sexual partners (adjusted OR 5.256, 95% CI (1.207 – 5.283)), more than 10 sexual partners (adjusted OR 2.784, 95% CI (1.201 – 6.451)), and having been in jail in the last 12 months (adjusted OR 3.096, 95% CI (1.260 – 7.608), while showing no differences among racial groups when using White/non-Hispanic as a reference group. However, among MSM individuals none of the behavioral risk factors examined were statistically associated with co-infection. The only factor with which an association was demonstrated was citizenship of the United States (adjusted OR 1.925, 95% CI (1.052 – 3.525)) while Hispanic race was negatively associated with co-infection risk among MSM (OR 0.400, 95% CI (0.288 – 0.555)). No other association with co-infection among racial groups was found when using White/non-Hispanic as a reference group. CONCLUSIONS: It is clear that in Maricopa County the population affected by syphilis from 1998-2008 is characterized by increased rates of HIV co-infection. The population affected by early syphilis and HIV co-infection is largely dimorphic between MSM and non-MSM affected, with distinct risk factors and demographic attributes. Clearly there is a need for public health interventions and awareness campaigns regarding the risk of HIV and syphilis co-infection and morbidity, as well as the increasing incidence of syphilis within the community of men who have sex with men, are needed in Maricopa County.