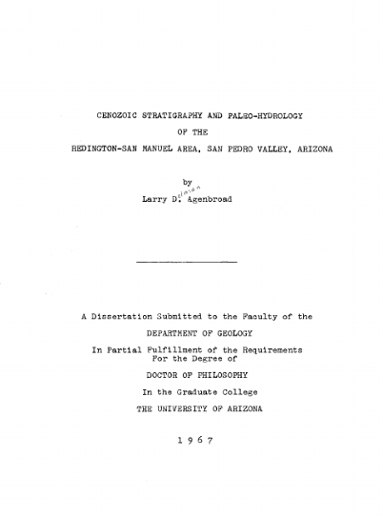 Post-Miocene fluvial and lacustrine units coristitute the valley fill of the San Pedro Valley, near Redington, Arizona. These sediments are relatively flat lying units deposited on older, deformed sediments, fault blocks of Tertiary volcanics, and erosion surfaces on Precambrian crystalline rocks. The sedimentary sequence is composed of silts, inudstone, sands, gravels, limestone, gypsum, diatomite, and pyroclastic units. Previous investigations have designated these lithologies one unit, the Gila Conglomerate. A recent study in the Mammoth area (Heindi, 1963) subdivided the Gila Conglomerate into the Quiburis formation, Sacaton formation and Pleistocene to Recent alluvial deposits. In the present study, this nomenclature was utilized, with a proposed subdivision of the Quiburis formation. Detailed mapping of the lithologic units indicate a lateral facies change within the Quiburis formation0 The conglomeritic member of the Quiburis formation interfingers with a central, fine-grained member, and the names Tres Alasnos, and Redington are proposed for these units. The age of the Quiburis formation is based on its stratigraphic position, and vertebrate fossils. The Qulbuns ovenlies tilted sediments containing Miocene fauna, and its upper portions contain fauna which have been assigned a middle to late Pliocene Age. The Sacaton formation was deposited on an erosion surface in the Quiburis in late Pliobene to early Pleistocene time; it was then entrenched and local, middle to late Pleistocene lacustnine units were deposited in the drainage pattern. Fresh water mollusks, horse and mammoth remains are present in the lacusbnine units. The Pleistocene lacustrine units were truncated by late Pleistocene terraces, and degradation proceeded to approximately 80 feet below the present floodplain. Aggradation occurred, to a level above the present floodplain, as attested by prehistoric hearths buried in river sediments, above the present stream gradient. Since 1880 the San Pedro River has begun another period of downcutting. The sedimentary deposits control the movement of ground water in the valley. Two hydrologic systems are present; a shallow water table system in the floodplain and river channel area, and an artesian system at 630- 1,200 feet below the valley floor in the northern portion of the study area. It is believed that deformed, pre- Miocene sedinentary units provide the source of recharge to the artesian system. Detailed mapping of the sedimentary units reveals a meandering central trough of the ancestoral San Pedro River. The contact between the Redington and Tres Alamos members of the Quiburis formation indicate the meander pattern, and its control by bedrock outcrop. Structural activity continued through Pliocene time, and is represented by north trending normal faults. Minor slump structures and small reverse faults are present in the Redington member of the Quiburis formation. A site survey, carried out during the field mapping, resulted in the location of nineteen archaeological sites. The sites range from preceramic Desert Culture to Salado and probably to later cultures such as the Apache. Older sites are peripheral to the valley axis, with more recent sites concentrated along the river. It appears that geologic-hydrologic factors controlling site location are: water sources; agricultural or gathering areas; quarry, or source material sites; and vantage points.