The politics of water resource management in the Tucson, Arizona S.M.S.A. 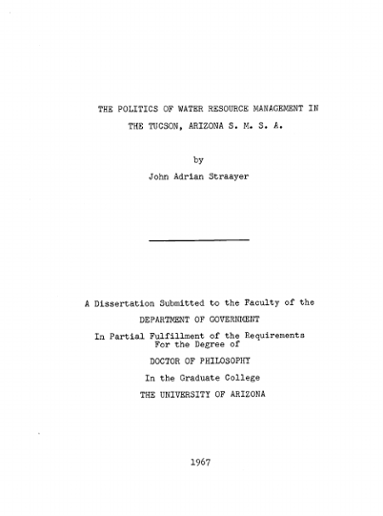 The City of Tucson and surrounding metropolitan area are located in Pima County's Santa Cruz River Valley in arid Southern Arizona. The U. S. Bureau of Census defines the Tucson S. M. S. A. as including all of Pima County. The Tucson S. M. S. A. has experienced rapid population growth since World War II and, in January, 1967, had an estimated population of 335,000. Precipitation in the Santa Cruz Valley is slight, averaging only ten inches a year. Agricultural irrigation accounts for almost seventy per cent of all water use. The sole source of water in the Santa Cruz Valley, except for a little reuse of sewage effluent for irrigation, is groundwater. In recent decades the rate of groundwater withdrawal has exceeded natural recharge and the water table has steadily declined. It is the opinion of many that unless water is imported soon, a water shortage crisis may develop; but this is not unanimous opinion. Water management in the Santa Cruz Valley is highly decentralized. The City of Tucson, several school districts, an irrigation district, a federal airforce base, several industries, nearly 100 private water companies and hundreds of private individuals "mine" groundwater. Also, several state and local agencies perform regulatory functions related to water use, Many of those involved in Tucson area water management believe this decentralized pattern precludes proper water management and that it frustrates planning for assurance of an adequate, long-term water supply for the community. The study concludes that the Tucson area has a water shortage problem, but not a critical one, and that the pattern of water management is highly decentralized, Major reasons for this decentralization are that (1) water can be readily and easily obtained almost anywhere in the Santa Cruz Basin simply by sinking a well and withdrawing groundwater, and (2) that there is no state or local legislation which prevents individuals, corporations or governmental units from pumping when and where they choose. This decentralization leads to inter-governmental conflict, the unequal funding of research and development of future water sources, and, frequently to a lack of organizational concern about the problem. Water managing agencies tend to be "internally oriented,tt displaying more concern for short-run economic savings than for assurance of adequate, long-term water supply for the community. Several organizations, seeking to obtain water as inexpensively as possible, pump groundwater when and where they please, with no concern as to the impact their pumping may have on the water supply. Many contribute nothing toward research and development of future water sources. Further, organizations tend to blame one another for the water problem. Arizona water law and a lack of water management direction at the state level also frustrate planning for assurance of a long-term water supply for the area. The study suggests that, at both the state and local levels, water management be centralized under the direction of the City of Tucson, Pima County, through creation of a water district, or through institutionalization of inter-governmental cooperation. Changes in. the Arizona water code are urged as is early development of new water sources. A critical examination of the merits of the proposed Central Arizona Project is suggested. It is concluded that the suggestions made in the study are not immediately politically feasible, but that they will be both politically feasible and necessary within a decade or two.