Soil and grass filtration of domestic sewage effluent for the removal of trace elements. 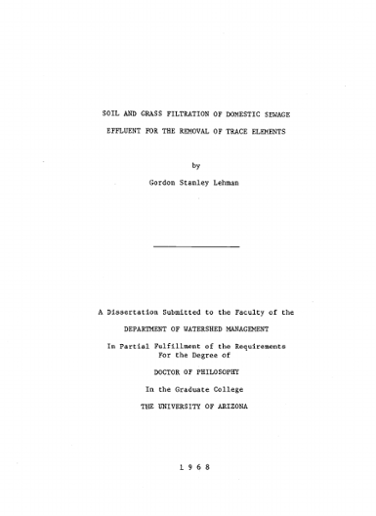 Soil and grass filtration of a domestic sewage effluent for trace element removal was investigated by applying oxidation-pond-treated waste water to twelve 2.44-meter-long, 30.5-cm-diameter, lysimeter columns and to a half-acre plot planted to common bermudagrass. Bermudagrass was also planted on the soil columns to aid in the removal of accumulated metals, thus prolonging the filtering capacity of the soil system. Four irrigation patterns, continuous flooding, alternate day flooding, one day wet-three days dry cycles and two days wet-five days dry cycles, were employed during the eleven week lysimeter test. Water samples were extracted from the soil columns at eight sampling depths to determine the soil depth at which the various trace metals were removed from the filtrate by the processes of adsorption, absorption and biological assimilation. Atomic absorption spectrophotometric techniques were used to determine the concentrations of iron, manganese, hexavalent chromium, nickel, copper, zinc, lead, cadmium, cobalt and strontium in the applied effluent, filtrate, soil and grass clippings. Filtrate samples for trace metal analysis were also extracted at shallow depths and from two groundwater zones at 9.1 and 15.2 meters depth under the grass plot. In the lysimeter study, iron, manganese, nickel, copper, zinc, lead and cadmium were removed from the filtrate at, or near, the soil surface. Some copper, zinc and cobalt were found in the deeper filtrate samples during periods of high infiltration rates and in the presence of anaerobic conditions. Smaller amounts of manganese, nickel and lead were also found at the deeper sampling points. Strontium was not removed from the water percolating through the calcareous soil employed in this study. Chromium and cobalt were not present in measurable quantities in the applied effluent. Iron and manganese were removed from the soil system in the grass clippings in the greatest amounts. Traces of copper, zinc and cadmium were also detected in the grass clippings. Larger quantities of iron, manganese and copper were detected in the filtrate at the grass plot than at comparable depths of the lysimeter columns, probably due to effluent applications at the grass plot over a period of two years. Lower quantities of nickel and lead in the filtrate at the grass plot were attributed to leaching by effluent during grass filtration tests, prior to the trace metal experiments. The concentrations of trace metals in the filtrate at the bottom of the lysimeter columns and in the groundwater zones at the grass plot were irsignificant by United States Public Health Service drinking water standards (1962) and would meet most other water supply requirements. The total nitrogen and nitrate contents were successfully reduced when a combination of aerobic and anaerobic environments were present in the soil system. Total nitrogen and nitrate levels were not reduced by grass filtration through 304.8 meters of dense grass. Fewer total coliform organisms were detected in the aerobic lysimeter columns than in the continuously flooded columns. The majority of coliform organisms detected in the filtrate at the 61 cm depth were believed to be of non-fecal origin. The chemical oxygen demand of the applied effluent was reduced to as low as 105 mg/L by grass filtration. A substantial portion of the remaining COD was attributed to high algal concentrations. The most effective treatment employed in this study was the one day wet-three days dry irrigation cycles. This treatment provided the necessary aerobic environment for trace metal removal from the effluent, nitrification of reduced nitrogen compounds and coliform organism elimination. The flooding period provided the anaerobic conditions required for denitrification losses of nitrate.