A geophysical study of the hydrogeology of the Walnut Gulch experimental watershed, Tombstone, Arizona. 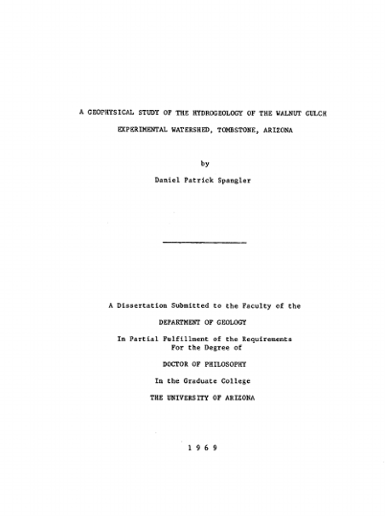 Integrated geophysical methods, in combination with available well and geologic data, were used for the purpose of defining the subsurface hydrologic and geologic conditions beneath the Walnut Gulch Experimental Watershed and its peripheral area near Tombstone, Arizona. The 58-square mile watershed, within the 290-square mile area covered by portions of this study, was chosen by the U. S. Department of Agricuiture for intensive research relating to the water and sediment yields from a semiarid range land watershed, Surface geology of the watershed reveals an alluvial fandike area between igneous intrusive and sedimentary rocks that support the Tombstone gills o the southwest and the Dragoon Mountains on the northeast, An interface between the Cenozoic alluvium and volcanic rocks, and the igneous intrusive and sedimentary rocks which are noted as the basement complex, was based on velocity determinations from several seismic refraction profiles, and density determinations of 127 surface samples from 75 sites in 19 different formations, Average values of 2.26 gm/cm3 (grams per cubic centimeter) for the Cenozoic alluvium and volcanic rocks and 2.65 gm/cm3 for the intrusive igneous and sedimentary rocks established a density contrast across the interface of 0.39 gm/cm3, A network of 360 gravity stations established over the watershed and its peripheral area aided in defining configuration of the basement complex, provided depth approximations of the alluvium, and controlled the bearings for subsequent seismic traverses. Magnetic profiles over deep, alluvium-filled areas and the surrounding exposed bedrock was postulated to be useful in deducing source areas and depositional patterns within the alluvium. Structural control of groundwater flow to the northwest was suggested through a combined study of dominant trends on the gravity and magnetic maps. A gravity profile north of the watershed across the largest negative anomaly, with the regional gradient removed, was interpreted as an alluvium-filled graben having a width of ten miles, and a depth of 3500 feet east of its center. Toward the southeast, several parallel gravity profiles indicated a decrease in width and depth of the structure. A total of 54 seismic refraction profiles, aggregating a length of 120,000 feet of in-line seismic profiling, was conducted in 13 areas, Velocities derived from reversed seismic profiles, and profiles conducted over outcrops, averaged 2200 feet per second for channel fill, 5000 feet per second for unconsolidated alluvial deposits, 8800 feet per second for conglomerates, and depending on the particular unit, 12,300 to 15,600 feet per second for basement-type rocks. Mapping of the water table in many areas revealed depths from near zero at the confluence of Walnut Gulch and San Pedro River, to 475 feet in the central portion of the watershed. The accuracy of predicting the depth to either groundwater or basement was ± 6 percent, while that for groundwater alone was ± 10 percent. Analysis of the timedistance data, and correlations with surface geology, grayity, and well data provided a basis for the interpretation of the hydrogeology and recent alluvial history. Finally, a new application of velocities was used in this study to analyze a part of the hydrologic cycle. Based on 23 pairs of observation, a prediction equation was derived through linear regression analysis of density versus velocity. Using seismic velocities, the prediction equation, and relationships between density and porosity, areas of maximum transmission losses within the channel were estimated.