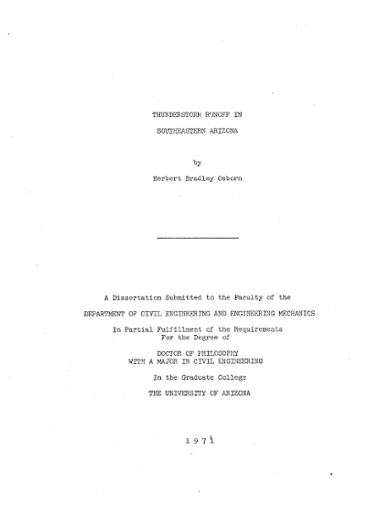 Almost all runoff-producing rainfall on small watersheds (100 square miles and less) in southeastern Arizona results from air-mass thunderstorms. On large watersheds (1,000 square miles and greater) frontal systems which may include thunderstorm activity or snowmelt produce the major flood peaks as well as much of the annual runoff. Air-mass thunderstorms are of short duration and limited areal extent, and generally occur in the late afternoons and early evenings in July, August, and September. Runoff-producing rainfall may occur from frontal-convective systems at any time although they are most common in southeastern Arizona in September. Rainfall and runoff records have been collected from the 58- square-mile Walnut Gulch rangeland watershed near Tombstone in southeastern Arizona by the Agricultural Research Service since 1954. These data represent the best information available on thunderstorm rainfall-runoff relationships in the Southwest. At present there are 95 recording rain gages and 22 permanent runoff-measuring stations on the Walnut Gulch watershed. Runoff-producing thunderstorm rainfall is extremely variable both in time and space, and is therefore difficult to measure accurately and define precisely. Isohyetal mapping for rainfall from individual thunderstorms both for total rainfall and shorter durations within the storm provides good qualitative information, and also provides some quantitative limits on storm movement, intensities and volumes, and areal extent. Runoff records from Walnut Gulch and other Arizona watersheds indicate that peak discharge and runoff volume from individual thunderstorms decrease with increasing watershed size because of the limited areal extent of runoff-producing thunderstorms and because cf the increasing channel abstractions with increasing watershed size. Channel abstractions greatly alter runoff hydrographs as flood surges move through the ephemeral channel system. Five major runoff-producing thunderstorms on Walnut Gulch between 1957 and 1967 were used to develop a model for the maximum expected rainfall in southeastern Arizona. The model was based on maximum 30-minute point rainfalls within the average 60-minute runoff-producing thunderstorm. Over 2.5 inches of rainfall has been recorded in 30 minutes on Walnut Gulch during 3 thunderstorms in 15 years of record (1955-1969). A thorough search of U.S. Weather Bureau and other records indicated that no storms of this combined intensity and magnitude have been recorded in Arizona. Therefore, for design purposes, the expected mean 30-minute rainfall for southeastern Arizona was estimated as 3 inches. Regression analysis was used to estimate peak discharges for major runoff events on Walnut Gulch and to develop a rainfall-runoff model for Walnut Gulch. Peak discharges were correlated with the maximum 30-minute rainfall, which was considered the core of runoff-producing rainfall for major runoff events. Antecedent channel conditions and distance between watershed outlet and runoff-producing rainfall had little effect on the correlation. The coefficients of determination for the regression equation correlating thunderstorm rainfall and peak runoff were 0.92 and o.84 for watershed 5 (8 square miles) and watershed 1 (58 square miles), respectively. With the model for maximum expected rainfall and the rainfall-runoff model for estimating peak discharge from maximum 30-minute rainfall, maximum discharge for the 58-square-mile Walnut Gulch watershed was 23,000 c.f.s. Assuming a normal distribution of errors, within 95 percent confidence limits, the limits were 19,000 and 27,000 c.f.s., and assuming the Chebyshev inequality, the limits were 15,000 and 31,000 c.f.s. Recurrence intervals for 20-, 50-, and 100-year storms and the maximum peak discharges were developed for small watersheds (100 square miles and less) from Walnut Gulch data. The curves were compared to a family of curves for Arizona watersheds up to several hundred thousand square miles. The family of curves based on Walnut Gulch data were much steeper, strongly suggesting that there are 2 families of curves, one steeper family for the small watersheds (100 square miles and less) which is based on runoff peaks from air-mass thunderstorms, and another flatter family of curves for the large watersheds (1,000 square miles and greater) which is based on runoff peaks from frontal-convective systems and snowmelt. The 2 families of curves probably intersect between 100 and 1,000 square miles.