The demand for motorboat use of large reservoirs in Arizona, 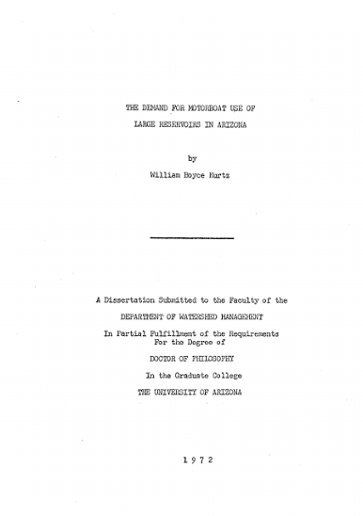 The valuation of public recreational facilities is complicated by the absence of a market established price. In this study, existing methods for valuing non-market priced recreational resources have been refined to compensate for price absence. In addition, crosselasticities of demand between recreation resources have been comptted to describe their substitution relationships. Questionnaires were mailed to a random sample of 2,000 owners of motorboats registered in Arizona to determine their socioeconomic characteristics, participation habits, expected participation during the 1967 boating season and costs of operating their boating outfit. To those respondents returning an acceptable questionnaire a returnable cost accounting ledger was mailed in which the boat owner could keep a complete record of his boating activities and costs during the study period. The expected participation information yielded by the questionnaire describes a boating season participation pattern unconstrained by short-run fluctuations due to unforeseen incidents. This exhibits the potential value of the facility for recreational use. Further, it was found that expected number of trips can be used as a single predictor variable for estimating recreation use for the forthcoming season. Since public recreation areas generally have only a token entry fee, their value may be captured by consumers in the form of a consumer's surplus. Compensated demand curves for the recreation resources were constructed to eliminate the income effect of a theoretical price change. This was accomplished by grouping consumers into cells according to their income and variable costs of participation, then calculating the differences in annual total fixed costs of participation between the marginal consumer (with the highest annual total fixed costs) and each intramarginal consumer within each cell. The value of a recreation resource obtained in the above manner represents the value to a perfectly discriminating monopolist. The value of reservoirs based on expected participation were found to be greater than resource value determined under actual participation, probably due to intercedence of short-run factors affecting actual participation plans. Demand curves for the recreation experience at different locations were constructed by linearly regressing actual and expected number of trips, respectively, on average total costs of participation. The elasticity of demand, in all instances, was inelastic, relating the relative insensitivity of the motorboat recreation market, in terms of participation adjustment, to changes in average total costs of participation. Actual participation demand, however, tended to be more elastic than expected participation demand, thus reflecting the constraints imposed on actual participation by various short-run factors. Cross-elasticities of demand between selected pairs of reservoirs were computed to describe the extent to which a shift in participation might occur at one reservoir as a result of an entrance fee imposition or increase at another assuming that the costs of attending all other reservoirs will remain constant. Three combinations of signs were found to exist among the reservoir pairs. With both signs positive the locations were assumed to bear a competitive relationship, offering a substitute recreation experience. If both signs were negative the locations were assumed to have a complementary relationship, implying that the locations do not offer a substitute recreation experience, though not necessarily independent. Finally, when one sign was positive and the other negative, the location with a substitute relationship to the other was assumed to offer the superior recreation experience. Sign combinations, however, did not remain consistent between pairs of reservoirs from actual to expected participation computations. Substitution relationships based on actual participation computations were discounted on the basis that due to such a small number of observations of actual attendance an accurate representation of the perception of the recreation experience was not obtained. Further, the substitution relationships based on expected attendance appeared more realistic than those based on actual attendance. Major factors influencing reservoir substitution relationships appeared to be the proximity of the resource locations to a major population center, their similarity in physical and/or user characteristics, accessibility and general level of facility development.