The hydraulic geometry of a discontinuous ephemeral stream on a bajada near Tucson, Arizona. 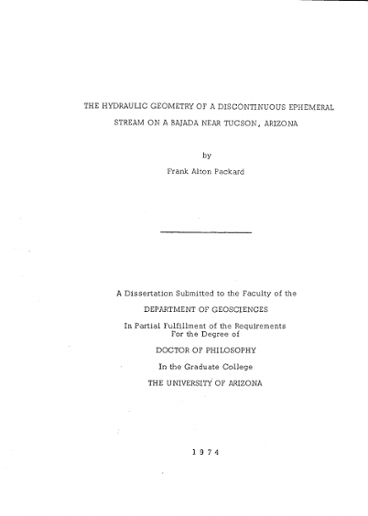 Study of the main channels of an ephemeral discontinuous stream shows the presence of pool-riffle morphology scoured into underlying Holocene muds. Pools are defined as starting at the point of maximum bed slope and reaching half the distance downstream to the next point of maximum bed slope. Pool-riffle morphology correlates well with high-stage hydraulics. Channel fill along pools is subject to hydraulicjump scour during intermediate-stage flows. Pools are preferentially scoured during high-stage discharges with flow completely in the tranquil flow regime. During large-stage flows, channel fill is almost completely washed away and the variable slope of the exposed mud subfloor is found to show negative exponential correlation to energy gradients, sediment transport, and shear. Reaches of steep bed slope and low shear become the locus of kinematic particle interference and gravel deposition during recession from high stages. During low-stage flow, relationships between bed slope and energy expenditure are the reverse of those during high-stage flow. Evidence indicates that certain discontinuous streams and their fans evolve to braid chute units along gullies comprising steep slope, braided channels upstream of a single-channeled chute of low slope. During large discharges, shear and sediment transport are higher along chutes, causing net scour of channel fill. This fill is stored along the braided channels of the next braid-chute downstream. During low-stage flows, the reverse occurs. Thus, the braid-chute functions as a morphologic unit to maintain evenness of sediment transport in an environment of variable flow sizes. Long-term sediment-budget deficit is indicated by gradual scour of channel subfloors. In all braid-chutes, the bed slope of the braid is greater than the slope of the flood surface, and both are greater than the bed slope of the chute. Along chutes, average low-stage energy slopes approximately equal bed slopes. As stages rise, energy slopes increase with increasing discharge so that at bankfull stages, they approximate the flood-surface slopes. This relationship allows the inference of a feedback link between channel slopes and flood-surface slopes along a chute. Along braided channels, energy slopes decrease with increasing stage. Hypothetically, the contrasting energy-gradient changes with discharge could produce a system in which bankfull stages are reached simultaneously along the entire braid-chute. Data for discontinuous streams indicate that they may be analogous to noncontinuous braided perennial streams. Braided reaches in such perennial streams may be correlated to the alluvial fans below discontinuous channels. Straight and sinuous perennial channels between braided reaches may be analogous to the discontinuous channel. Bed slopes of the discontinuous channel and its analogues are flatter than those of adjoining flood surfaces. This contrast in gradients brings flow close to the level of the flood plain at some point downstream where the flow can begin to spread laterally onto this surface. In the ephemeral environment, this downstream branching usually takes place over a riffle. The fan, which lies below the studied discontinuous stream, contains braided-channel flow, mixed channel flow and sheetflow, and sheetflow, respectively, in a down-fan direction. It is postulated that a low water to sediment discharge ratio over a long time span would produce net deposition in the fan as well as in the discontinuous channel upstream. This, in turn, would force the fanhead to migrate upstream over the filling channel. Valley alluviation, thus caused by a discontinuous stream, would construct an elongate, tabular body of sediments composed of coarse channel deposits at the base overlain by laterally extensive channel sands and sheetflood sands. Above these, there would be finer grained sheetflood silts.