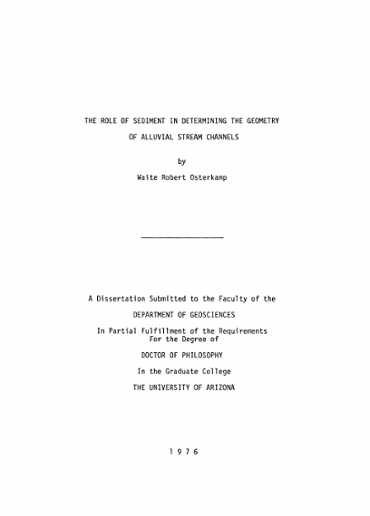 Data compiled from standardized procedures for width measurement at established streamflow gaging stations were used to develop a power-function relation between width in feet (W(A)_), and mean discharge in acre-feet per year (Q), for high-gradient perennial streams. Highgradient channels, which generally exhibit low variability for most factors influencing the width-discharge relation, were selected to indicate a standard exponent in the power-function equation. Flume data supported extrapolation of the high-gradient relation, Q = a w(A)¹•⁹⁸, through five orders of discharge magnitude. Further support for a standard exponent of the regression equation was provided by data from Kansas streams that had very silty beds and similar gradients, climate, and vegetation. Regression analysis of data from these streams gave an exponent of 2.01. Hence, a constant exponent of 2.0 was used for the width-discharge relation of all streams. To account for the effect of sediment on channel geometry, silt-clay percentages of the bed and bank material of 98 perennial streams of the western and midwestern United States were introduced into the standard width-discharge relation. Bed and bank cohesiveness, as indicated by silt-clay content, is considered a measure of channel competence. Narrowest streams for a specific mean discharge occur where channel competence, due to fine material and other variables including channel armoring and lush riparian vegetation, is greatest. Thus, at constant discharge, stream width varies inversely with both bed and bank silt-clay content. Multiple-regression analysis yielded the equation: Q = 2.0 w(A)²•⁰ (SC(bd))⁰•²² (SC(bk))⁰•⁵⁷ where SC(bd) and SC(bk) are percent silt-clay of bed and bank material, respectively. The average standard error of estimate for the relation is 58 percent, much of which is inferred to result from excessive width caused by bank erosion of historically recent flood events. Other causes of deviation from the relation include errors associated with the collection and analysis of data, climate and riparian vegetation, discharge variability, and armoring by coarse sediment sizes. Studies showing that stream channels are widened during periods of flooding suggest that most streams subsequently narrow toward an equilibrium width at normal discharges. Assuming that about one-sixth of the data sets, those exceeding one standard deviation, indicate streams too narrow owing to unrepresentative data or recently deficient runoff, the multiple-regression equation was modified to define channel equilibrium. For known conditions of mean discharge and sediment characteristics, an equilibrium width, W(eq) , can be calculated. Comparison with the measured width, W(A), defines the instability ratio, W(A)/W(eq) , The instability ratio identifies the degree to which channel width varies from assumed equilibrium, and ranges from 1.0 to 1.5 for most perennial streams. The ratio of suspended load to bed load appears to be a principal determinant of channel morphology, whereas sediment yield affects the rapidity with which channel healing can occur after widening by flooding. Greatest channel instabilities generally occur in sandchannel streams of arid to semiarid areas. In humid areas, lush vegetation, which encourages accretion of fine sediment sizes to bank material, induces channel stability. Low discharge variability, as shown by springs and regulated streams, generally results in low values of instability. Utility of the multiple-regression equation includes estimation of discharge from ungaged basins, and prediction of short-term changes in channel morphology resulting from altered supplies of water or sediment. Isolation of the influence of sediment on the width-discharge relation also permits consideration of the effects of other variables on channel shape.