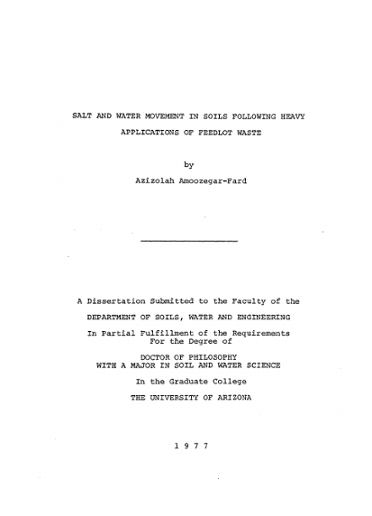 The movement of salts in soils following application of feedlot wastes was studied experimentally and theoretically. The objectives of the study were (1) to evaluate the movement of salts in the soil following heavy application of animal wastes as related to the aggregate sizes of manure and water management practices and (2) to develop a mathematical model to predict the movement of salts within the soil and manure mixture. In the experimental study, air dried manure was formed into three distinct sizes, small (to pass 40 mesh sieve), medium (0.9 am in diameter, 1.2 cm in length), and large (1.8 cm in diameter, 1.8 cm in length). Soil columns of 15 cm inside diameter were packed with 30 cm of a soil-manure mixture over a 10 cm depth of soil. The manure application rate was equivalent to 100 metric tons/ha calculated on the basis of the cross-sectional area of the column. A total of five pore volumes of water was passed through the soil under continuous and intermittent water applications. The leachates were collected in 1/2 pore volume increments and the volume, EC, and pH determined immediately. Within 48 hours of the sampling, the leachates were analyzed for Na, K, Ca, Mg, Cl, and five trace elements (Fe, Mn, Zn, Cu, and Ni). The EC of the leachate for the first 1/2 pore volume was significantly (1% level) highest for the small-sized aggregates and the lowest for the large aggregate treatments under both moisture regimes. During the second increment, the order was reversed. In the later water applications, the EC for small aggregates was higher than the other sizes. There were no significant differences between the EC of the leachate from medium and large aggregate treatments during the later periods under either water treatments. Under both moisture regimes, the amount of Na removed from small aggregates decreased more rapidly than the other sizes. More than 90% of the total Na added to the system by manure was removed from the small aggregate treatment. In contrast, the highest amount of K removed (895 mg from small-sized aggregates under continuous leaching' represents about 35% of the total amount present In the manure applied. More Ca was removed from the small-sized aggregate treatments under both moisture regimes than was added by manure application. As for Mg the pattern of the removal was similar to that of Ca. No Cl was detected in the leachate after the fifth 1/2 pore volume was displaced. A mathematical model was developed to predict the movement of readily soluble ions such as Na, K, and Cl from different aggregate sizes of manure. The theoretical curves were compared with earlier experimental data and the parameters appearing in the mathematical equation were estimated. The results for Cl, Na, and K are presented graphically, and the estimated parameters as well as the values of the square roots of the sum of the squares between the theoretical and experimental values as percentage of the sum of the experimental values (SSR) are reported. From the low value of SSR's, it is evident that the model can predict the movement of the readily soluble ions from different aggregate sizes of manure quite accurately. A discussion on the suitability of the model for different sizes of manure aggregates and also a comparison between two different procedures to fit the model to the experimental data are given. In addition, a three phase theoretical model was developed to describe the movement of readily soluble ions from a soil-manure-water system. Experimental data were used in testing the model. The results for Na, K, and Cl are presented graphically. Estimated parameters for the experimental system and the values of SSR are presented. This model also can predict the movement of readily soluble ions from a soil-manure-water system.