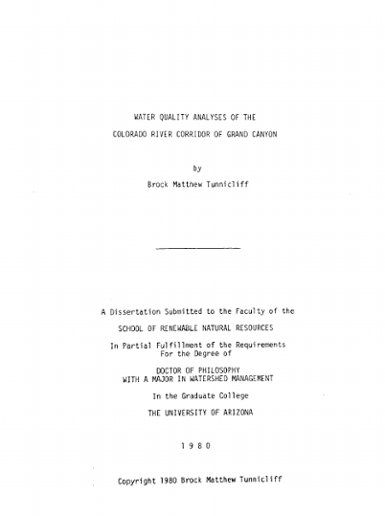 Water quality analyses in Grand Canyon examined Colorado River and tributary baseline water quality status in relation to recreational float trip use of the river corridor. Float trip use of Grand Canyon has increased over recent years (since 1966) to levels which have caused concern for water quality-river running associations. River runners have traditionally used the Colorado River and tributaries as sources of drinking and cooking water, for swimming and bathing, and, at times, as a disposal for some refuse, e.g., dishwater and leftover food. Associated with float trip use of the river corridor water resources has been potential water quality hazards. During the 1972 and 1979 float trip seasons (May through September) outbreaks of gastroenteritis occurred among river runners in Grand Canyon, prompting investigation by the Center for Disease Control, Atlanta, Georgia; an enteric pathogen Shigella sonnei was isolated from some river-trip participants. Potentially, the Colorado River or a tributary served as a source or carrier of the pathogen, though this has not been confirmed. Enteric disease organisms excreted in feces by humans, wildlife or domestic animals can become potential sources of infection; water contaminated with fecal organisms can distribute diseases. Water quality analyses of the Colorado River corridor occurred during the 1978 and 1979 river running seasons. Examination of the extensive river corridor necessitated analyses in the field. Travel through the Grand Canyon was via research rafts in a series of six float trips, April through September, in 1978, and two float trips, July and August, in 1979; 82 field days in 1978 and 22 field days in 1979. A total of 497 water quality samples were collected over two seasons from the Colorado River along the 225-mile stretch from Lees Ferry to Diamond Creek, the launch and take-out points of the research trips. The confluent reaches (within approximately 200 yards of the Colorado River) of 26 side creeks in the river corridor were also sampled in 1978; nine tributaries were sampled in 1979. Additional samples collected from upstream locations on some side creeks increased the tributary sample site total to 33 in 1978 and to 13 in 1979 for a two season total of 165 individual tributary samples. Selected microbial, physical, and chemical parameters were measured to determine baseline water quality status in the Colorado River corridor of Grand Canyon. Research emphasis was on microbial water quality; physical and chemical parameters were measured to facilitate evaluation of the microbial profiles. Microbial parameters included fecal coliform bacteria and fecal streptococcus bacteria densities; physical parameters included turbidity and water and air temperature; chemical determinations included alkalinity, hardness, phosphate, nitrate, chloride, total dissolved solids, and pH. Data from 1978 and 1979 show that the Colorado River and tributaries have similar bacterial water quality profiles. Surface waters show predominantly low FC densities, indicating high quality waters for recreational activities, based on established federal and state water quality standards. Treatment of river and tributary surface water is necessary to assure drinking water quality standards. Bottom sediment analyses modify considerably the water quality status represented by surface water analyses alone. Significant densities of enteric organisms are present in the river and tributary environments, representing an important water quality hazard. Associated with resuspension of bottom sediments is the probability of surface water contamination by enteric organisms. Recreational activities, particularly water play in confined tributary pools, can bring river runners in direct contact with concentrated sediment suspension in surface waters.