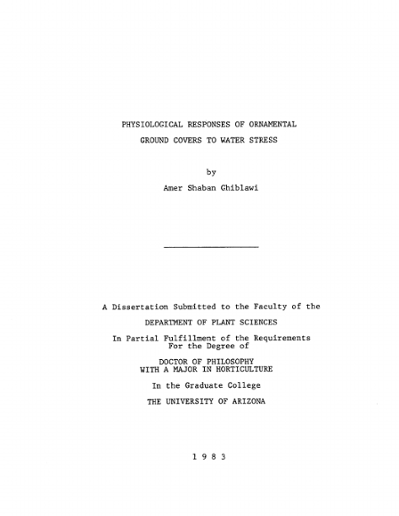 The effect of water stress on the growth, landscape performance, and plant-water relations of four ornamental ground cover species (gray santolina, Santolina chamaecyparissus; dwarf rosemary, Rosemarinus officinalis; Chihuahuan Desert lantana, Lantana velutina; and prostrate germander, Teucrium chamaedrys) was investigated for a twoyear period. Plants were established in a drip irrigated field and subjected to four soil moisture regimes (-1, -5, -10, and -15 bars), monitored by neutron probe. While water stress reduced vegetative covers, shoot growths, heights, and fresh and dry weights of the plants, species response to water deficit varied greatly. Minimum amounts of water required for growing each species were determined. Germander was found to be the most drought tolerant, followed by santolina, rosemary, and lantana in decreasing order. In earlier treatment period, adequately watered plants showed better aesthetic appeal and landscape performance than the plants grown under a high soil moisture tension. However, the effect of water stress on plants' landscape performance was less evident as plants became more established. In all species tested, with an exception of germander, leaf water, osmotic, and turgor potentials of nonstressed plants were higher than those of severely stressed plants. Using the pressure-volume technique, apoplastic water was found to contribute a significant proportion of the total tissue water content. The dilution of symplastic water by apoplastic water during osmotic potential determinations was found to be the major cause of the frequently observed negative turgidity. Methods for correcting for these apoplastic dilution effects were suggested. Osmotic potentials at full and zero turgor, symplastic water contents, changes in water, osmotic, and turgor potentials relative to changes in cell water content (Blifler diagrams), and cell wall elasticity varied significantly with species and treatments. Water stress caused a reduction in total chlorophyll and carotenoids concentrations and in the chlorophyll/ carotenoids ratio, without changing chlorophyll a/chlorophyll b ratio in plant tissues. Leaf reflectances to incident light as measured at 400 to 700 nm were found to differ substantially by species but not by treatments. No consistent correlations were found to exist between leaf pigment content and each of dominant wavelength, brightness, and the purity of leaf color.