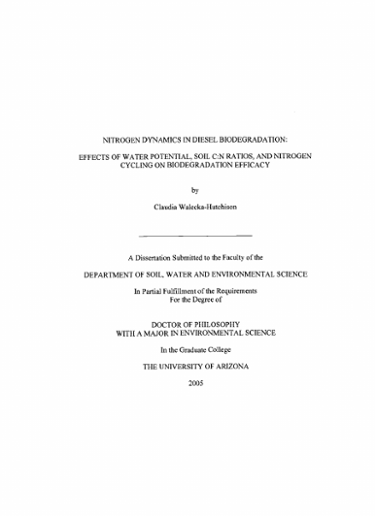 Respirometric experiments were performed to evaluate the role of nitrogen in aerobic diesel biodegradation. Specific objectives included 1) evaluating the effects of water potential induced by various nitrogen amendments on diesel biodegradation rates in arid region soils, 2) comparing concurrent effects of C:N ratios and soil water potential on diesel degradation rates, and 3), measuring gross rates of nitrogen cycling processes in diesel-contaminated soil to determine duration of fertilizer bioavailability. In all studies, increasing nitrogen fertilization resulted in a decrease in total water potential and correlated with an increase in lag phase and overall reduction in microbial respiration. Highest respiration and estimated diesel degradation was observed in the 250 mg N/kg soil treatments regardless of diesel concentration, nitrogen source, or soil used, suggesting an inhibitory osmotic effect from higher rates of nitrogen application. The depression of water potential resulting in a 50% reduction in respiration was much greater than that observed in humid region soil, suggesting higher salt tolerance by microbial populations of arid region soils. Due to the dependence on contaminant concentrations, use of C:N ratios was problematic in optimizing nitrogen augmentation, leading to over-fertilization in highly contaminated soils. Optimal C:N levels among those tested were 17:1, 34:1, and 68:1 for 5,000, 10,000 and 20,000 mg/kg diesel treatments respectively. Determining nitrogen augmentation on the basis of soil pore water nitrogen (mg N/kg soil H₂0) is independent of hydrocarbon concentration but takes into account soil moisture content. In the soil studied, optimal nitrogen fertilization was observed at an average soil pore water nitrogen level of 1950 mg N/kg H₂0 at all levels of diesel contamination. Based on the nitrogen transformation rates estimated, the duration of fertilizer contribution to the inorganic nitrogen pool at 5,000 mg/kg diesel was estimated at 0.9, 1.9, and 3.2 years in the 250, 500, and 1000 mg/kg nitrogen treatments respectively. The estimation was conservative as ammonium fixation, gross nitrogen immobilization, and nitrification were assumed as losses of fertilizer with only gross mineralization of native organic nitrogen contributing to the most active portion of the nitrogen pool.