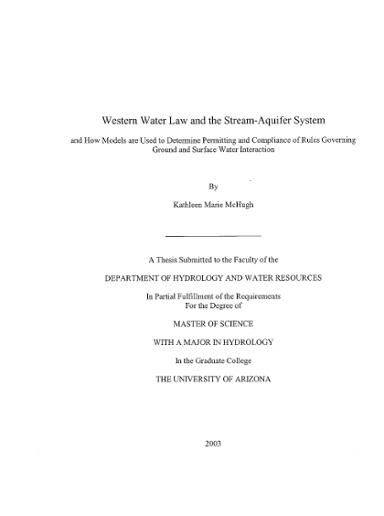 As the arid western half of the United States faces increasing population, its problems with water shortages are becoming headline news across the nation. Issues ranging from farmers in Klamath basin fighting for their water rights, rafters and kayakers fighting to raft down rivers enclosed by private properties, endangered species residing in the flowing waters, interstate river treaties, and massive drought conditions across the west have all left the western states asking: "Is there enough water to go around?" Increases in population, protection of endangered species, recognition of federal and tribal water rights, and aesthetic preferences all put pressure on the water system practiced in the West. All western states deal with the entire water system in various ways. Scientific reality shows that the stream-aquifer system is not two separate entities, but is one. As decision makers face this hydrologic reality, they realize that the current policy and political boundaries are not well suited to the intricacies of nature. Many of the western states currently apply two separate doctrines to surface water and groundwater, providing very little protection, if any, for senior surface water users from junior groundwater users. This thesis' purpose is threefold: (1) To provide and explain the basic hydrological principles that all decision makers should be aware of and understand; (2) to present a current summary of both surface water law and groundwater law in several western states, and, specifically, the laws pertaining to groundwater/surface water interaction; and (3) to present a discussion of a few models being used in assessing how section 2's laws are affecting the system as a whole. Section One will discuss basic aquifer properties, groundwater flow, pumping effects on an aquifer, and the concept of capture. The goal of this section will be to illustrate the system as a whole and how pumping always has an effect on a stream system that is hydraulically connected to an aquifer. Section Two presents the pertinent groundwater and surface water laws for Arizona, Colorado, Kansas, Nebraska, New Mexico, Oregon, Texas, and Washington. This area highlights the laws that pertain to the interaction between surface water and groundwater. In many of these states the evolution of these laws is also provided through legislative bills, acts, and court cases. Finally, Section Three discusses several models or techniques being used to assess the effects these laws have on the groundwater/surface water system.