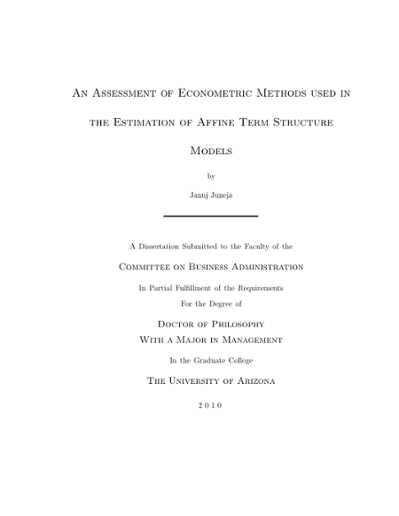 The first essay empirically evaluates recently developed techniques that have been proposed to improve the estimation of affine term structure models. The evaluation presented here is performed on two dimensions. On the first dimension, I find that invariant transformations and rotations can be used to reduce the number of free parameters needed to estimate the model and subsequently, improve the empirical performance of affine term structure models. The second dimension of this evaluation surrounds the comparison between estimating an affine term structure model using the model-free method and the inversion method. Using daily LIBOR rate and swap rate quotes from June 1996 to July 2008 to extract a panel of 3,034 time-series observations and 14 cross sections, this paper shows that, a term structure model that is estimated using the model-free method does not perform significantly better in fitting yields, at any horizon, than the more traditional methods available in the literature.The second essay attempts explores implications of using principal components analysis in the estimation of affine term structure models. Early work employing principal component analysis focused on portfolio formation and trading strategies. Recent work, however, has moved the usage of principal components analysis into more formal applications such as the direct involvement of principal component based factors within an affine term structure model. It is this usage of principal components analysis in formal model settings that warrants a study of potential econometric implications of its application to term structure modeling. Serial correlation in interest rate data, for example, has been documented by several authors. The majority of the literature has focused on strong persistence in state variables as giving rise to this phenomena. In this paper, I take yields as given, and hence document the effects of whitening on the model-implied state-dependent factors, subsequently estimated by the principal component based model-free method. These results imply that the process of pre-whitening the data does play a critical role in model estimation. Results are robust to Monte Carlo Simulations. Empirical results are obtained from using daily LIBOR rate and swap rate quotes from June 1996 to July 2008 to extract a panel of zero-coupon yields consisting of 3,034 time-series observations and 14 cross sections.The third essay examines the extent to which the prevalence of estimation risk in numerical integration creates bias, inefficiencies, and inaccurate results in the widely used class of affine term structure models. In its most general form, this class of models relies on the solution to a system of non-linear Ricatti equations to back out the state-factor coefficients. Only in certain cases does this class of models admit explicit, and thus analytically tractable, solutions for the state factor coefficients. Generally, and for more economically plausible scenarios, explicit closed form solutions do not exist and the application of Runge-Kutta methods must be employed to obtain numerical estimates of the coefficients for the state variables. Using a panel of 3,034 yields and 14 cross-sections, this paper examines what perils, if any, exist in this trade off of analytical tractability against economic flexibility. Robustness checks via Monte Carlo Simulations are provided. In specific, while the usage of analytical methods needs less computational time, numerical methods can be used to estimate a broader set of economic scenarios. Regardless of the data generating process, the generalized Gaussian process seems to dominate the Vasicek model in terms of bias and efficiency. However, when the data are generated from a Vasicek model, the Vasicek model performs better than the generalized Gaussian process for fitting the yield curve. These results impart new and important information about the trade off that exists between using analytical methods and numerical methods for estimate affine term structure models.