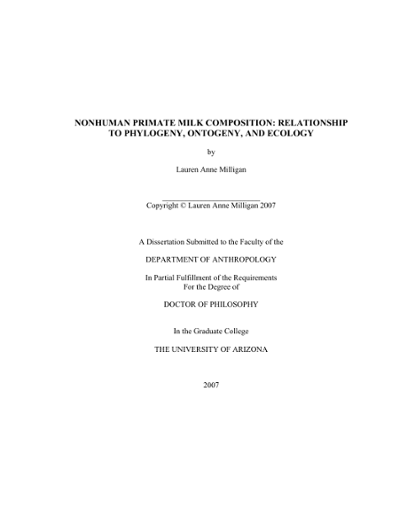 This dissertation provides a comprehensive and systematic examination of anthropoid primate milk composition and its relationship to a species' evolutionary history, ecological context, and life history strategy. Milk samples from 14 species of anthropoid primate (Alouatta paliatta, Callithrix jacchus, Cebus apella, Gorilla beringei beringei, Gorilla gorilla gorilla, Hylobates lar, Leontopithecus rosalia, Macaca mulatta, Macaca sinica, Pan paniscus, Pan troglodytes, Pongo pygmaeus, Saimiri boliviensis boliviensis, and Symphalangus syndactylus) were analyzed for proximate composition (fat, protein, lactose, dry matter, and minerals) and milk fatty acid composition. The objectives of this study were identification of primitive features in anthropoid milks, shared-derived features of anthropoid families or superfamilies, and unique-derived features of species, including Homo sapiens.Results did not support the null hypothesis of a generalized anthropoid milk composition. Variation among anthropoids in milk fatty acid profiles and proximate milk composition was influenced by phylogeny and the life history strategy of the species, as well as the diet and environment (captive or wild living) of the mother.Maternal diet had a direct influence on fatty acid profiles and created distinct groupings of wild and captive living individuals. Phylogenetic patterns were identified within captive and wild groups, particularly a distinction between milk fatty acid profiles of hominoids (including humans) and monkeys.Significant variation in proximate milk composition was identified at the level of the superfamily. Cercopithecoid milk was highest in mean fat, dry matter, the proportion of energy from fat, and total gross energy. Ceboid milk was highest in mean protein and the proportion of energy from protein. Hominoid milks were lowest in mean fat, protein, dry matter, the proportion of energy from fat, and total gross energy.Hominoid milk also was lowest in the degree of plasticity in milk composition. Milk of captive living monkeys was higher than milk of wild living monkeys in mean fat, percent energy from fat, and total gross energy. Milk fat and energy also were highly variable within captive living monkeys. In contrast, fat and total gross energy were not significantly different between captive and wild living hominoids and were less variabile among captive living hominoids as compared to monkeys. The lack of variability and the relatively low energy values in hominoid milk suggest that it may be buffered against environmental fluctations. Larger body size and a longer duration of lactation may permit hominoids, including humans, to decouple maternal condition from milk energy and instead relying on energy storage.