Sociocultural Perspectives on the Wind Orchestra Music of Boris Kozhevnikov, with an American Edition of the Fourth Symphony 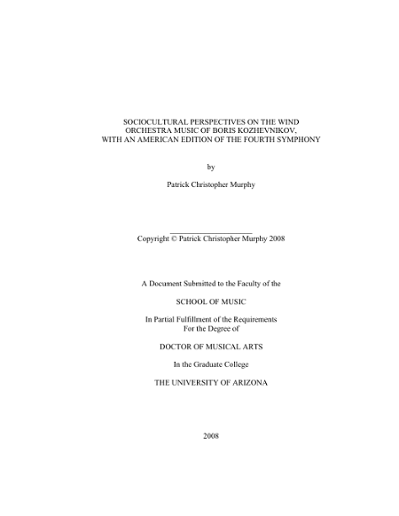 Boris Kozhevnikov was a preeminent composer for the wind orchestras of the Soviet military. His Third Symphony is well known in the United States, but the rest of his compositions, and most of the Soviet wind band repertoire, remain unstudied and unperformed outside Russia. This document will explain how Soviet composers carried out their musical obligations as dictated by Communist Party mandates. Further, the functionality and prevalence of Soviet military bands will be explored. Finally, Boris Kozhevnikov will be investigated as a composer who wrote for military ensembles while adhering to Party ideals. American editions of two pieces--the Fourth Symphony and March for Ceremonial Passing--have been created as representative examples of Kozhevnikov's contribution to the genre.Socialist Realism is the term used to describe the Soviet government's mandate for "appropriate" music. Composers were expected to write music that was accessible to the masses, contained programmatic inferences, and aroused sentiments of patriotism and nationalistic pride. Rejected were any pieces displaying formalistic tendencies, including non-programmatic, overly chromatic, or atonal works.Three thousand military wind orchestras were performing in the Soviet Union at the end of the Cold War. These ensembles played original Russian and Soviet music, the vast majority of which is unknown outside Russia. Composers such as Dmitri Shostakovich, Nikolai Miaskovsky, and Sergei Prokofiev wrote for the military ensembles, providing marches and programmatic works.Boris Kozhevnikov taught at the Moscow Conservatory and Institute of Military Conductors for over forty years. He was a highly respected professor, composer, and conductor, and received praise from both Miaskovsky and Shostakovich. One of the first composers to write multiple symphonies for band, Kozhevnikov composed over forty pieces for winds, all exhibiting fundamentals of Socialist Realism. Among his techniques were the incorporation of folk, worker, and revolutionary songs; compositions specifically written and titled for commemorative events; and the composition of works for functional purposes, such as marches and ceremonial music. For his efforts, Kozhevnikov was awarded as a Distinguished Artist of the Russian Soviet Federative Socialist Republic, the Red Star, the Red Banner, the Alexandrov Award, and the Order of the Badge of Honor.