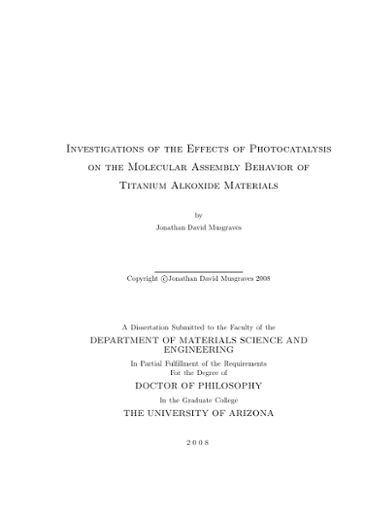 The control of molecular assembly at the onset of solution-based material formation has the potential to strongly influence the topology of the ensuing molecular aggregate structure, and from there the macroscale physical properties of the resultant material. The present work focuses on the use of engineered, photoactive metal alkoxide precursors in the sol-gel processing of metal-oxide materials. The strategy under investigation seeks to integrate photoinduced structural modification with conventional sol-gel chemical preparations to enable the selective photo-activation of reaction points about the metal center during material formation. The approach thus has the potential to influence the development of intermolecular bonding geometry and to provide an opportunity to enforce or bias longer range structural development processes and resulting network topology. This ability to bias the long range structural development has been shown to provide opportunities both for photoinduced material formation and the potential to control multi-length scale structural characteristics of these materials. The response of a mononuclear, heteroleptic titanium alkoxide (OPy)₂Ti(4MP)₂ [where OPy = pyridine carbinoxide and 4MP = 4-mercaptophenoxide] to ultraviolet (UV) irradiation in dilute solution and in solid-state samples has been measured. Vibrational spectroscopy (FTIR absorption and Raman scattering) was used to monitor changes in molecular structure upon exposure to 337.1 and 365 nm light. Assignment of spectral features to vibrational modes of the molecule was aided by a normal-mode analysis of the energy-minimized molecular structure within a density functional theory (DFT) framework. Photoinduced decreases in peak areas were observed in both FTIR spectra of the precursor solutions and Raman data collected from solution-cast films of the precursor material. These changes were associated with vibrational modes localized at the 4MP ligands. Conversely, no significant modification of vibrational structure associated with the OPy moiety was observed under the excitation conditions examined. In a related study, thin films of the precursor were cast, sampled, and UV-irradiated in scintillation vials under hydrated air (40% RH) and dry argon to evaluate the influence of local atmospheric composition on the photoresponse. An increase in the magnitude of photoinduced vibrational changes was observed in the moist air environment, again associated primarily with the 4MP ligand. The results support an interpretation of these structural changes in terms of a preferential enhancement of hydrolysis at the 4MP site under these conditions. Excitation, with 248 nm light, of a solution of (OPy)₂Ti(TAP)₂ [where OPy = pyridine carbinoxide and TAP = 2,4,6 tris(dimethylamino)phenoxide] in watercontaining pyridine has been shown to create an insoluble photoproduct in the region of the incident laser beam. Analysis of the photoproduct by Raman spectroscopy indicates the presence of hydrolysis and condensation products as well as features consistent with the unreacted metal alkoxide, indicating destabilization of the alkoxide material that leads to intermolecular linking reactions. Further analysis indicates that it is excitations resonant with the π − π∗ transitions in the aromatic ligands, as well as in the solvent, that provide this destabilization rather than excitations resonant with the charge transfer band in the molecule. These fundamental studies of the intrinsic molecular-level response of (OPy)₂Ti(TAP)₂ to ultraviolet irradiation have lead to the development of a novel thin film deposition process wherein the film is deposited directly from solution onto a substrate only in the regions in which it is exposed to ultraviolet light. Patterned deposition of 100 m wide lines of material was demonstrated using a slit-shaped aluminum shadow mask during exposure. Stylus profilometry confirmed that the average thickness of the photodeposited film varied monotonically with accumulated UV-fluence, exhibiting thicknesses of 10 to 310 nm for fluences of 12 and 192 J/cm2, respectively. Moreover, the surface profile of the film surface at fluences greater than 12 J/cm² was found to reproduce the near-field, Fresnel diffraction pattern anticipated from the slit mask used. The nanoscale porosity of films deposited from solution using this technique was found to be dependent on the chemistry of the precursor solution used, with a 1 part addition of water to the precursor producing films with 100 nm diameter surface pores, and an 8 part addition of water to the precursor producing films with no visible surface porosity. Post-deposition thermal treatments have been explored as a means to modify the as-deposited chemistry and nanostructure of the photodeposited films. As-deposited films showed spectral characteristics indicating only a partial disruption of the starting molecular structure by the ultraviolet irradiation, retaining many of the ligand-based spectral features of the precursor. Films that were fired to 350 °C under an oxygen atmosphere no longer showed FTIR features corresponding to ligand-based vibrational modes, with the Raman spectrum of the material showing an increase in the wavenumber range that is indicative of Ti-O-Ti bonding, leading to the conclusion that the residual alkoxide ligands had been removed. In contrast films fired to this temperature under argon showed Raman features assigned to graphite-like structures, indicating that the reducing atmosphere led to the retention of the phenyl moieties in the fired films. The experimental results obtained from optical spectroscopy for both (OPy)₂Ti(4MP)₂ and (OPy)₂Ti(TAP)₂have been interpreted through the aid of quantum computational models. This modeling procedure, based in the Density Functional Theory framework, has allowed for an optimization of the proposed molecular structures into ground state geometries, from which normal mode analysis routines have been used to produce theoretical Raman and FTIR spectra. Additionally, Density Functional Theory models were used to interpret the excited state behavior of the (OPy)₂Ti(TAP)₂ molecule by predicting the high energy molecular orbitals and calculating the transition strength between the lower and upper levels to produce the theoretical ultraviolet-visible absorption spectrum. These calculations provided insight into the nature of the photoexcitation pathways available to the molecule upon the absorption of ultraviolet irradiation and the possible nature of the photoproducts formed as a result.