The Culture of Football: Violence, Racism and British Society, 1968-98 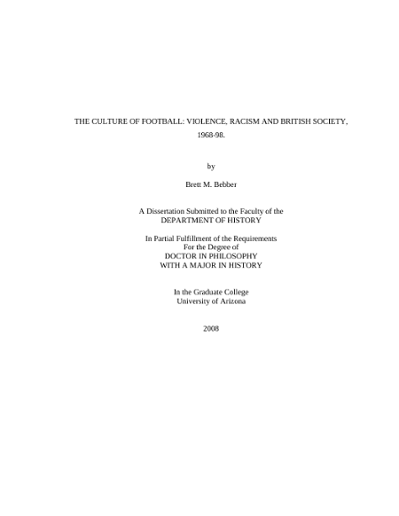 Britain enjoys a rich historical tradition of popular protest and collective action. Due to their public and publicized nature, sporting events have been recognized increasingly as venues in which broader cultural and political meanings are enacted and debated in the postwar period. This project examines how social anxieties about immigration, unemployment, and government repression were represented and contested through violence and eventually racist aggression at football matches. From 1968 to the mid-1970s, violence among fans and with police became expected on a weekly basis within and outside British football stadiums as new forms of spectator allegiance and sports consumption emerged. British football became a contested cultural and institutional site of racisms, violence, masculinities, and national mythologies. Rather than examining football per se, the principal aim of this project is to investigate how this distinct cultural milieu became a site for the British government to enact violence against working-class citizens by manipulating moral anxieties, physical environments, police tactics, and legal prosecution. Whereas many British sociologists have focused on the motivation of crowd behavior and the group dynamics among supporter gangs, this paper looks at the response of the state, local police authorities, and the Home Office and Department of Environment. Politicians concerned with British sport helped to create oppositional, aggressive and disciplinary environments that promoted mutually reciprocating violent environments. Beginning in the late 1970s, spectators not only participated in violence, but also racial abuse, in stadium environments. Several fans protested the emergence of successful black footballers, who came to represent conflicts about immigration, job and housing competition, and race riots in postwar Britain. The environment became a cultural location that several groups recognized as a platform for the contestation and manipulation of racial and class conflict: it garnered activism from the neo-fascist National Front, spawned several anti-racist organizations, captured the attention of the Home Office responsible for public order, and garnered extensive national press coverage. Consequently, the football environment not only mirrored social and political hostilities, but produced them as well.