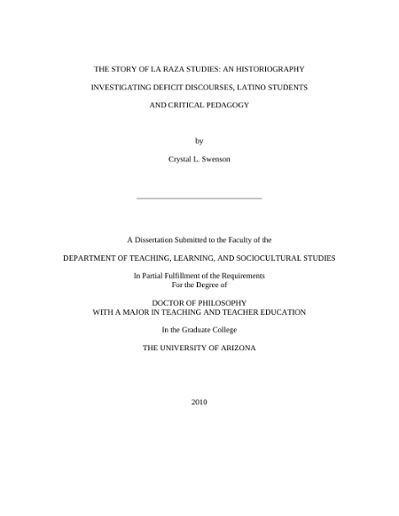 Constructed from a social justice paradigm, the researcher of this study combines historical research methods, case study strategies and the lens of critical race theory (CRT) to investigate the Raza Studies program within the Tucson Unified School District’s Ethnic Studies Department. With equal emphasis, this study has four aims: 1) to provide a deep literature review revealing the historical plight of Latin@ students (Darder, 1997; Valencia, 1991/1997/2002); 2) to explore the maintenance of deficit discourses and subtractive schooling conditions in relation to Latin@ students (Ogbu, 1998; Solórzano and Yosso, 2001; Valenzuela, 1999); 3) to offer a counter discourse based on an exploration of alternative critical pedagogies (Cammarota and Romero, 2006/2009; Freire, 1970/1973; Giroux; 1988; Kincheloe; 2004; McLaren, 1997/2003) and; 4) to tell the story of Raza Studies primarily using newspaper articles, letters to the editor and editorials written in response to four major events that occurred from 2007-2010. Within this study, CRT is the most effective theoretical framework to uncover the malignant schooling conditions and practices imposed on Latin@ youth because it allows the researcher to examine how racial stereotyping might contribute to the continued marginalization and subordination of Latin@ students. In turn, the investigation into the conditions and events surrounding La Raza Studies suggests that implicit (and explicit) racist attitudes, within the public discourse, not only impede Latin@ student success but that they also intend to. (Solórzano and Yosso 2001; Giroux 2005). Additionally, this historical descriptive account is further developed and magnified by a critical analysis of the data (58 opinion-based responses retrieved from a local newspaper). Coding for indicators of a deficit discourse (stereotypes, prejudice, xenophobia, etc.), a critical reflection and discussion of these texts is considered within the larger themes of power, ideology, and hegemony. (Apple, 1979/1995; Fairclough, 1995/2001; Giroux, 2004/2005; Giroux and McLaren, 1989; Gramsci, 1971; van Dijk, 1987/1998; Wodak, 1989). In consideration of the four aims of this study combined with the researcher’s theoretical framework and bias, she believes the reader will gain a more empathetic, even if only a more informed, perspective regarding the educational plight of Latin@ students.