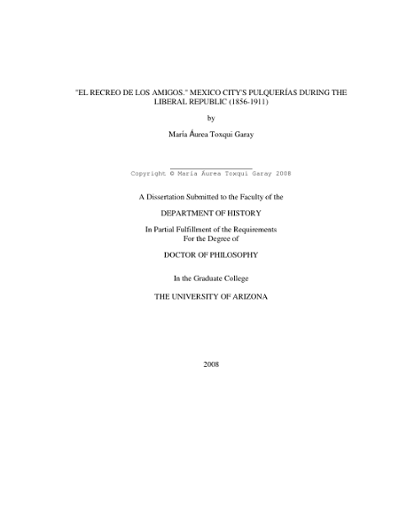 By 1909, Mexico City had a little more than 720,000 inhabitants, 250 schools, and almost 1,000 pulquerías -drinking establishments serving pulque, a fermented beverage made of the maguey plant. Today, pulquerías have almost disappeared; but just a century ago, people enjoyed gathering there. Since their beginnings in the 1530s, pulquerías became an integral part of the life of Mexico City’s inhabitants. These taverns offered pulque to take out, but far more importantly, a space where men and women drank, talked, danced, and enjoyed themselves as a part of their daily social life. These spaces represented an important place in the city’s lower-class culture and daily life. In this dissertation, I explore the social and cultural development of these businesses. I focus my discussion on the second half of the nineteenth century and the first decade of the twentieth century when there was a constant effort of making of Mexico a modern nation like England, France, or United States. Under the influence of liberalism, authorities increasingly sought to control the behavior of the population, especially in the public arena with the goal of creating hardworking and moral citizenry. They saw pulque as the core of social evils, and pulquerías, as centers where inebriated urban masses abandoned their daily routine, procrastinated, and fought. Consequently, authorities strictly regulated schedules, facilities, and all activities taking place in pulquerías. Patrons and owners resisted those regulations in different ways; especially customers, through their everyday practices, developed a vigorous and multi-faceted response to the processes of modernization. 13 Within these places, alcohol consumption fostered an environment of free interaction and gave men and women a platform in which they could demand and contest explanations about the behavior of their neighbors, partners, and coworkers. Their discussions and fights prove to be significant to the understanding of the regulation of the neighborhood dynamics as well as valves of escape during changing times. By analyzing the historical intersections of popular culture, nation building and modernization programs, and lower class responses to these reforms this dissertation contributes to the study of the cultural and social history of Mexico.