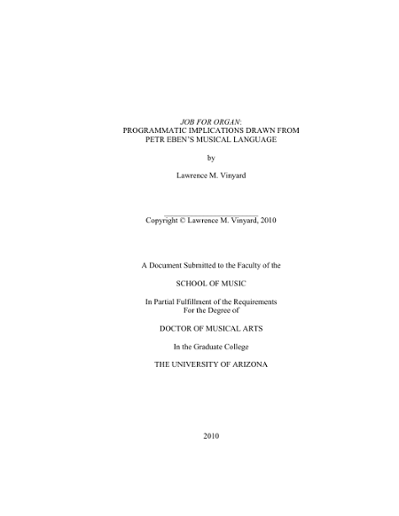 Job for Organ is an eight movement organ cycle by the Czechoslovakian composer Petr Eben (1929-2007). This work is based upon the story of Job in the Old Testament. Eben perceived the dramatic depth of the Book of Job and created a musical work that vividly portrays the consequences of a wager between Satan and God on the fate of a human being--in this case, Job. The eight movements of this cycle tell the story of Job's struggle, perseverance, and triumph in the midst of human suffering. Job remains faithful to God throughout his trials, and in the end God rewards him for his faithfulness.This document thoroughly explores the methods Petr Eben used to illustrate the story of Job, as a musical program, in the organ cycle Job for Organ. My purpose is to find connections between the program and Eben's compositional techniques. This study focuses upon three specific musical devices and how each device is used to portray a musical program: musical quotations, associative themes, and dramatic musical contrasts.I isolate the musical quotations utilized in this cycle and demonstrate how each quotation supports the program. I identify associative themes and their interrelationships and demonstrate how these devices dramatize the story as it was written in the Book of Job. Associative themes include the canon, passacaglia, and numerous motives, textures, and melodies, all crafted to symbolize portions of the narrative as it unfolds. I demonstrate Eben's use of dramatic musical contrasts to convey a musical program, including the juxtaposition of tonal and polytonal harmonies, sudden changes in timbre and (or) dynamics, abrupt rhythmic interjections, the use of unique textures, unusual melodic and harmonic transformations, and changes in registration, dynamics, meter, and range. A complete list of the devices Petr Eben used to illustrate programmatic intent in the organ cycle Job for Organ would be quite extensive. Although there is no unimpeachable way of proving that my conclusions represent the way Eben intended the listener to interpret his work, my suggestions represent logical and plausible associations between musical devices and programmatic intent based upon a thorough examination of Job for Organ. Eben's compositional technique is dramatic in nature and his music lends itself to theatrical interpretation. This document provides a detailed musical analysis of each movement of the work, and the author offers a possible recreation of the plot and its interpretation, based upon extensive analysis of the score and Petr Eben's program notes. Detailed graphic maps of each movement vividly portray the musical themes, textures, musical quotations, dramatic musical contrasts, and their interrelationships, and reveal a fabric of allusion that suggests a plausible programmatic basis for this composition based upon these musical devices. The analysis demonstrates that Job for Organ is a product of utmost craftsmanship. It is a powerful musical drama that vividly portrays Job's ordeal utilizing an extended musical program.