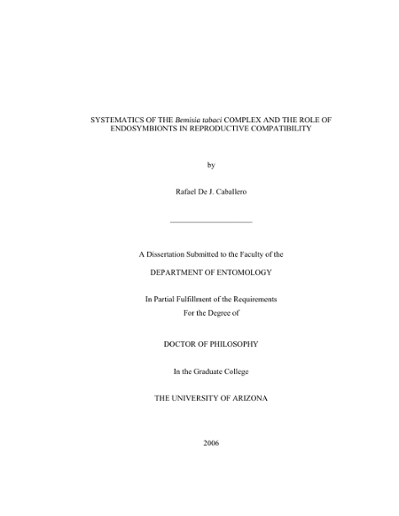 Reciprocal and homologous crosses were carried out using pairs or groups of twenty males and females for three biotypes of the whitefly Bemisia tabaci complex. Crosses were undertaken for the A biotype-Arizona (AzA), the B biotype-Africa (AzB), and the monophagous, Jatropha (Jat) biotype-Puerto Rico. The maternal haplotype pedigree of parents and selected offspring (F₁, F₂) was determined using the mitochondria cytochome oxidase I sequence. All reciprocal crosses yielded viable female offspring, indicating reproductively compatibility, except for AzB♀ x AzA♂, or AzB♀ x Jat♂ crosses, which yielded females unidirectionally. As an unidirectional pattern was reminiscent of cytoplasmic-mediated incompatibility (CI), the possibility was investigated that the phenotype might be caused by CI-bacteria, instead of a germ line barrier. Using the 16S rRNA sequence three prospective CI-bacterial species were identified in whitefly colonies. A Cardinium spp. (Bacteroidetes) was present in the A biotype (isolates AzA, CulA, RivA, SalA), whereas the B biotype (isolates AzB, FlB1, FlB2) was infected with Rickettsia bellii (Proteobacteria), and a Wolbachia spp. (Proteobacteria) was associated with the Jat biotype. The unidirectional incompatible phenotypes were consistent with CI-bacterial infection of AzA (Cardinium) and Jat (Wolbachia), but no such association was apparent for B biotype-Rickettsia infections. The bidirectional compatibility for Jat x AzA suggested a CI-bacteria-mediated reciprocal rescue. However, that Wolbachia-infected Jat♀ and Cardinium-infected AzA♂ crosses yielded fewer females, compared to AzA-Cardinium♀ and Jat- Wolbachia♂ crosses, suggested that Cardinium could better counter Wolbachia-induced female mortality than Wolbachia. This suggested the possibility that these phylogenetically divergent bacteria might utilize similar CI-mechanisms. In this study, the suspect CI-bacteria were strongly associated with complete or partial obstruction of gene flow in certain crosses, and with sex bias in the AzA x Jat crosses. This is the first evidence that female offspring can be produced between phylogeographically divergent, and polyphagous and monophagous B. tabaci, for which gene flow barriers are widely reported, suggesting that hybridization is utilized as a means of diversification in B. tabaci. The inability to rid colonies of CI-bacteria has necessitated introgression experiments to investigate direct CI-causality over CI-association.