Nizar Qabbani: From Romance to Exile 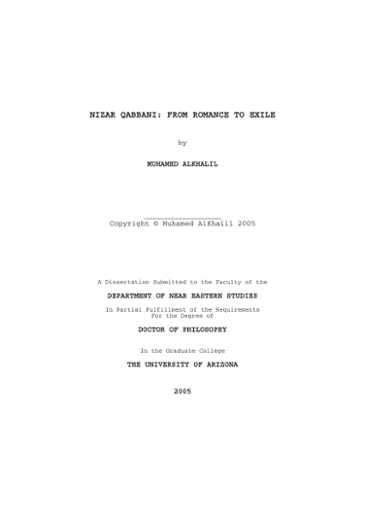 The subject of this dissertation is the life achievement of Syrian poet Nizar Qabbani (1923-1998). The study follows two tracks, one literary focused on the poetry and biography of the poet, and one historical focused on the concurrent political and social developments in the Arab world in the twentieth century. The two tracks contextualize and elucidate each other to form a mega-narrative of Arab life in modern times. The narrative begins by investigating the intellectual world in which Nizar grew up, continues on to examine his unique personal and familial makeup as well as the social and political context of the times, then proceeds to analyze his poetic achievement as it unfolded. In so doing, a picture emerges of the Arab experience in modern times as reflected in Nizar's own creative experience and tumultuous life.The narrative concentrates initially on Syria, more specifically on Damascus, being the birthplace and the breeding ground where the poet's character was first shaped. But once the poet leaves on his many journeys, a wider perspective is adopted to highlight the many other influences that ultimately went into his making, reverting back to Syria insomuch as it continued to influence the poet's unfolding narrative. Although a chronological line threads through the work starting from the poet's birth in 1923 to his passing in 1998, this line is accentuated throughout the life of the poet by the many places he lived in - cities that left their distinctive mark on his consciousness and poetry. As such, the mega-narrative, much like a journey, sets a background of progressive time against a foreground of places that give meaning to the timeline. In general terms, this study views the life of Nizar Qabbani in three interrelated and overlapping stages: a sensuous period (1923-52) that can be poetically described as local, direct, masculine, confident, and joyful; a period of social responsibility (1952-1973) that can be described as mixed, confused, itinerant, transvestite (both feminine and masculine), rebellious and conformist, happy and unhappy at the same time; and an exilic period (1973-1998): committed, feminine, rebellious, esoteric, melancholic and despairing.