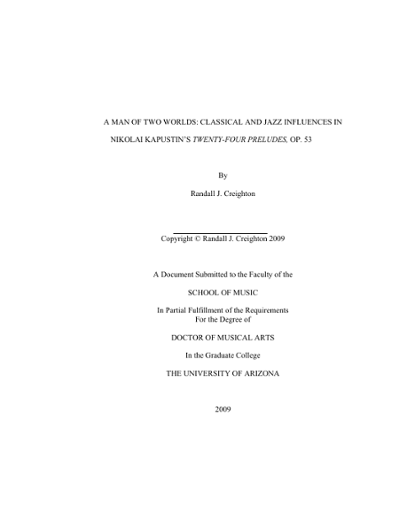 Nikolai Kapustin was born in 1937 and has been active as a composer since the late 1950s, though he has only become relatively well known in the West since around 2000. Despite the fact that he has spent his whole life in Russia, Kapustin was strongly influenced by American jazz and his compositional style has always been a combination of the formal elements of classical music and the stylistic elements of jazz. Critics have all commented on Kapustin's astute blend of classical form and jazz style, mentioning the influence of Russian composers Rachmaninov and Scriabin, while also noting echoes of Art Tatum, Oscar Peterson, and Chick Corea. The Twenty-Four Preludes, Op. 53 were published in 1988 and follow the key sequence set forth by the Chopin Preludes, Op. 28. These preludes are as virtuosic and ambitious as those of Chopin, Scriabin, and Rachmaninov.A close examination of the score of the Twenty-Four Preludes, Op. 53 reveals that Kapustin uses several methods of thematic organization, including variations of scoring, thematic transformation, and spinning out the germ of an idea in a more improvisatory way and that these techniques can be traced directly to the music of Rachmaninov, Scriabin, Liszt, and Beethoven. There are examples of ternary, rondo, and monothematic forms, and the ternary Preludes in particular contain elements similar to sonata-allegro form. Kapustin's musical language is infused with the harmonic and rhythmic elements of jazz, with ample use of added note chords in sophisticated voicings. The echoes of various jazz artists are represented by his skilled use of pianistic techniques like stride and walking bass along with a broad range of harmonic and rhythmic devices that span the stylistic range from Swing and Novelty piano, to Bebop and contemporary Jazz-rock. Though he is clearly familiar with standard jazz harmonic devices, he uses them sparingly, preferring instead to use modulation and developmental models that are grounded in classical music practice. From modern jazz, he takes quartal, pentatonic, and diminished harmony, along with highly chromatic two-voiced textures similar to those used by jazz artists from the 1960s onward, particularly Miles Davis.