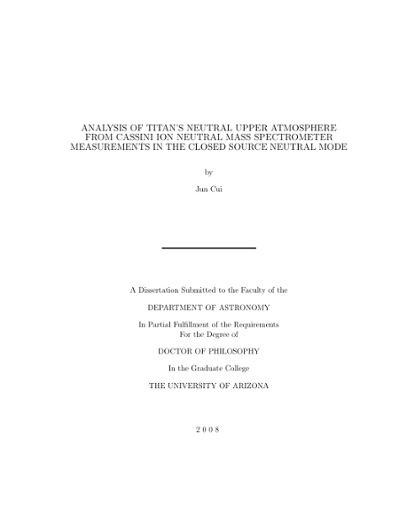 In this thesis I present an in-depth study of the distribution of various neutral species in Titan’s upper atmosphere, at altitudes between 950 and 1,500 km for abundant species (N₂, CH₄ as well as their isotopes) and between 950 and 1,200 km for most minor species. However, the study of the H2 distribution on Titan is extended to an altitude as high as 6,000 km in the exosphere. The analysis is based on a large sample of Cassini/INMS (Ion Neutral Mass Spectrometer) measurements in the CSN (Closed Source Neutral) mode, obtained during 15 close flybys of Titan. The densities of abundant species including N₂, CH₄ and H₂ are determined directly from their main channels. However, to untangle the overlapping cracking patterns of minor species, the technique of Singular Value Decomposition (SVD) is used to determine simultaneously the densities of various hydrocarbons, nitriles and oxygen compounds. All minor species except for ⁴⁰Ar present density enhancements measured during the outbound legs. This can be interpreted as a result of wall effects, which could be either adsorption/desorption or heterogeneous surface chemistry on the chamber walls. In the thesis, I use a simple model to describe the observed time behavior of minor species. Results on their atmospheric abundances are provided both in terms of direct inbound measurements assuming ram pressure enhancement and values corrected for wall adsorption/desorption. Among all minor species of photochemical interest, the INMS data provide direct observational evidences for C₂H₂, C₂H₄, C₂H₆, CH₃C₂H, C₄H₂, C₆H₆, HC₃N and C₂N₂ in Titan’s upper atmosphere. Upper limits are put for other minor species. The globally averaged distribution of N₂, CH₄ and H₂ are each modeled with the diffusion approximation. The N₂ profile suggests an average thermospheric temperature of 154 K. The CH₄ and H₂ distribution constrains their fluxes to be 3.0×10⁹ cm⁻² s⁻¹ and 1.3×10¹⁰ cm⁻² s⁻¹, referred to Titan’s surface. The H₂ escape flux is about a factor of ∼3 higher than the Jeans value, which is interpreted as enhanced thermal escape driven primarily by an upward conductive heat flux. Such a conclusion is based on kinetic model calculations in the 13-moment approximation that require energy continuity at the upper boundary. On the other hand, a proper interpretation of the observed CH4 escape has to rely on the detailed nonthermal processes, which are still unknown at the present time. The INMS observations of the nitrogen isotope ratio implies ¹⁴N/¹⁵N= 131.6 near Titan’s surface. The profile of carbon isotope ratio combining INMS and GCMS results implies that both CH₄ and its isotope escape from Titan’s exobase with roughly the same drift velocity, in contrast to the Jeans case which requires that CH₄ escapes with a much larger velocity due to its smaller mass. The INMS data also suggest horizontal/diurnal variations of temperature and neutral gas distribution in Titan’s thermosphere. The equatorial regions, the ramside, as well as the nightside hemisphere of Titan appear to be warmer and present some evidences for the depletion of light species such as CH₄. Meridional variations of most heavy species are also observed, with a trend of depletion toward the north pole. Though some of the above variations might be interpreted by either the solardriven models or plasma-driven models, a physical scenario that reconciles all the observed horizontal/diurnal variations in a consistent way is still missing, With a careful evaluation of the effect of restricted sampling, some of the features shown in the INMS data are more likely to be observational biases.