ETHICAL SELFHOOD AND THE STATUS OF THE SECULAR: ISLAM, MODERNITY AND EVERYDAY LIFE IN MUMBAI 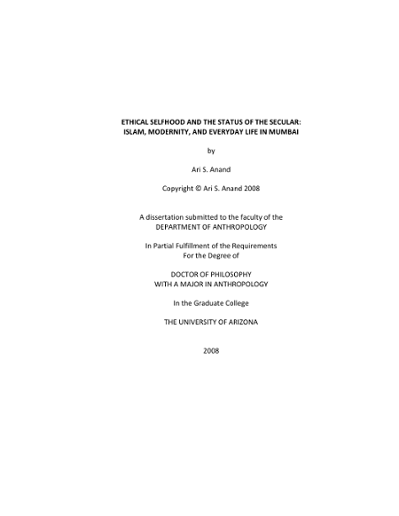 In this dissertation I explore social identity, secularism, and Indian Muslims' conceptions and experiences of living in a secular state while debating among themselves the meanings of ethical Muslim selfhood. Through participant observation and interviews based on over 15months of intensive field research, undertaken in a predominantly Muslim area of south-east Mumbai, my research focused on two groups of Muslim men--middle-class entrepreneurs and householders in their early to mid thirties, and senior students, from their late teens to early twenties, from a madrasa (Islamic seminary) attached to a prominent mosque in the city. Owing to its complex and intense dynamism, I also emphasize the city as an important agent in shaping everyday life. The core of my work is to explore secular life and secularism, central to India's liberal conception of itself as a pluralist democracy, that emerge through the lived experiences of Muslim men engaging with various daily pressures and transactions in an intensely dynamic urban context while trying to maintain a self understood to be ethical in terms of an inherited Islamic tradition. In discussing everyday phenomena such as piety and religious authority, gender, childraising, popular culture, personal and professional pursuits and ethical conduct, I demonstrate that the ostensibly `religious' domain of Islam is not necessarily the only, or even primary, basis for achieving selfhood for even those who identify as observant and devout Muslims. Rather, I argue, the religious domain of Islam in this context is defined as such and intersected by discourses and practices of the self as a political and economic agent, that is, a self defined in terms of political modernity. Thus this dissertation also contributes to the current anthropological rethinking of categories like `religion', `secularism', and `politics' in relation to social processes and subjects: a series of projects that are related, in the Indian context, to modernity and liberal conceptions of statehood, sovereignty, and personhood. A major conclusion of this work is that while most Indian Muslims have largely internalized (and accept) the liberal differentiation of politics and religion, the modern secular project in India nevertheless remains incomplete.