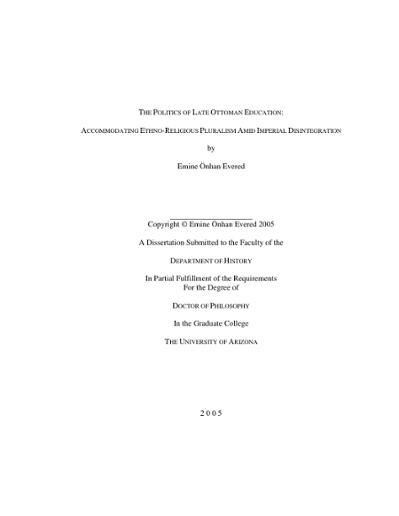 A major factor cited in the collapse of the Ottoman Empire is the emergence of nationalist ideologies and identities among the empire’s ethno-religious minority groups. Such arguments, however, often fail to recognize roles played by the Ottoman state itself in promoting – albeit unwittingly – politicizations of such constructs. By examining Ottoman educational policies during the reign of Sultan Abdülhamid II (1876-1909), it becomes evident that policies intended to contain, manipulate, or otherwise affect the conduct of ethno-religious minorities’ identities and/or politics actually promoted their particularization. Individualizations of ethno-religious identities in a pluralistic society like the Ottoman Empire thus exacerbated problems of resistance, fragmentation, and secession. This research thus examines Ottoman politics of education vis-à-vis the ethnic and religious minorities of the empire during the nineteenth and early-twentieth centuries. While numerous studies have examined ways in which education fostered political cohesion when administered directly or through other governmental institutions, few have examined those examples when such policies failed – or even fostered fragmentation. In considering alternate cases, one quickly ascertains that while these cases may have been traumatic and far from uniform through time and over place, their eventual successes resided in the fact that they did foster loyalties on the basis of the universal ideal of a nation-state. By contrast, educational policies in societies lacking the nation-state as the ultimate ideal – and the nation as ultimate sovereign, might be said to have failed eventually. In ethnically, religiously, and linguistically pluralistic societies like the Ottoman Empire, evolved notions of citizenship were the best that could be aspired to without obvious alienations of particular groups. In such cases, increased involvements by the state – even when designed to enhance the loyalties of its citizens, could be seen as having catastrophic outcomes for multi-ethnic/-religious empires in the modern era of the nation-state. In short, this work maintains this observation as its primary thesis and seeks to foster an inquiry into its conduct and consequences with respect to the ethnic and religious minorities of the Ottoman Empire. This research draws upon unique primary materials written in Ottoman Turkish that were acquired from archives in Turkey. In sum, histories of Ottoman educational politics illuminate many of the failings of citizenship-fostering and/or nation-building educational agendas that would subsequently be enacted worldwide in pluralistic societies. Indeed, such examples were even apparent later as the Turkish Republic attempted to deal with its minorities. At a time when certain ideologies, religions, and nationalisms of the Middle East are characterized as malevolent, this collective experience from Ottoman educational history yields a powerful and cautionary lesson as to the potential ramifications of state policies geared towards controlling, co-opting, marginalizing, or otherwise manipulating political, religious, and/or other identity-based constructs.