A Palynological Study of Landscape Change During the Spanish Colonial Period in the U.S. Southwest 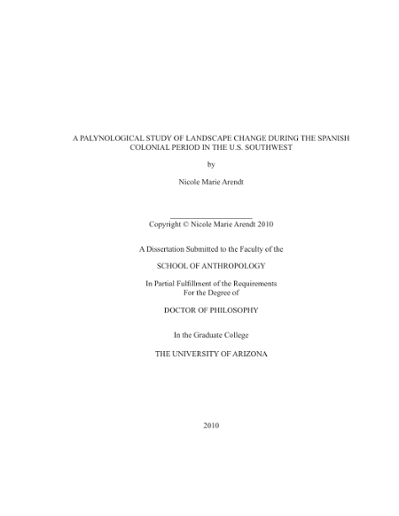 The introduction, intentional or otherwise, of plants (both cultivated plants and weeds), animals, and technologies that occurred with Spanish colonization in the Southwest had profound impacts on vegetation and landscape that are reflected in larger changes in indigenous land and resource use, culture, and identity. Archaeological palynology provides information on both the environmental and agricultural impacts of colonialism. Through the study of two sites occupied during the colonial period, in different areas, reflecting different experiences of colonized groups, the range of effects of introductions is investigated. Paa-ko, in New Mexico, was occupied in the early colonial period and was more peripheral to the colonial system than was the second site, Tumacacori, in southern Arizona, the location of a mission that was occupied into the mid-1800s.The identification of introductions, including both new plants and new ways of cultivating and processing plants, in the pollen record is central to this study. The differentiation, using pollen diameters, of grasses is particularly important, although studies of reference pollen show a great overlap between these types. Because of the importance of pollen diameters for the identification of this and other pollen types, factors that could affect pollen size, including processing methods, which did not seem to have much effect, and mounting media (and time since processing), which had rather dramatic effects on diameters, are also important. These and other experimental studies conducted to provide analogs to agricultural and processing areas that would have been seen in the Spanish colonial period, can assist in the interpretation of pollen samples from sites of this period, including the two sites discussed here. While the pollen evidence from Paa-ko demonstrates a continuation of the cultivation of native crops, including maize and squash, and the absence of cultivation of introductions, pollen from Tumacacori demonstrates the absence of cultivation of native crops, particularly maize, and, possibly, cultivation of wheat, in the area closest to the mission and most heavily influenced by missionary control, reflecting, perhaps, the greater integration of Tumacacori into the colonial system and a greater acceptance and use of introduced crops in this later colonial period.