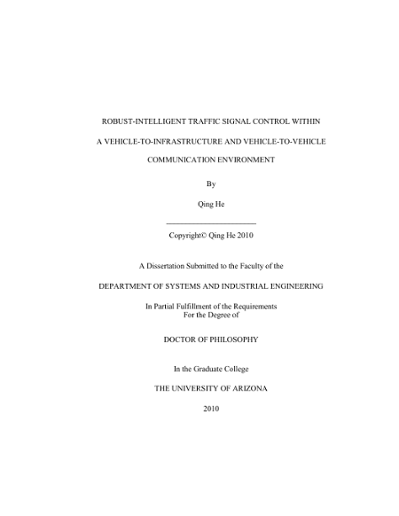 Modern traffic signal control systems have not changed significantly in the past 40-50 years. The most widely applied traffic signal control systems are still time-of-day, coordinated-actuated system, since many existing advanced adaptive signal control systems are too complicated and fathomless for most of people. Recent advances in communications standards and technologies provide the basis for significant improvements in traffic signal control capabilities. In the United States, the IntelliDriveSM program (originally called Vehicle Infrastructure Integration - VII) has identified 5.9GHz Digital Short Range Communications (DSRC) as the primary communications mode for vehicle-to-vehicle (v2v) and vehicle-to-infrastructure (v2i) safety based applications, denoted as v2x. The ability for vehicles and the infrastructure to communication information is a significant advance over the current system capability of point presence and passage detection that is used in traffic control systems. Given enriched data from IntelliDriveSM, the problem of traffic control can be solved in an innovative data-driven and mathematical way to produce robust and optimal outputs.In this doctoral research, three different problems within a v2x environment- "enhanced pseudo-lane-level vehicle positioning", "robust coordinated-actuated multiple priority control", and "multimodal platoon-based arterial traffic signal control", are addressed with statistical techniques and mathematical programming.First, a pseudo-lane-level GPS positioning system is proposed based on an IntelliDriveSM v2x environment. GPS errors can be categorized into common-mode errors and noncommon-mode errors, where common-mode errors can be mitigated by differential GPS (DGPS) but noncommon-mode cannot. Common-mode GPS errors are cancelled using differential corrections broadcast from the road-side equipment (RSE). With v2i communication, a high fidelity roadway layout map (called MAP in the SAE J2735 standard) and satellite pseudo-range corrections are broadcast by the RSE. To enhance and correct lane level positioning of a vehicle, a statistical process control approach is used to detect significant vehicle driving events such as turning at an intersection or lane-changing. Whenever a turn event is detected, a mathematical program is solved to estimate and update the GPS noncommon-mode errors. Overall the GPS errors are reduced by corrections to both common-mode and noncommon-mode errors.Second, an analytical mathematical model, a mixed-integer linear program (MILP), is developed to provide robust real-time multiple priority control, assuming penetration of IntelliDriveSM is limited to emergency vehicles and transit vehicles. This is believed to be the first mathematical formulation which accommodates advanced features of modern traffic controllers, such as green extension and vehicle actuations, to provide flexibility in implementation of optimal signal plans. Signal coordination between adjacent signals is addressed by virtual coordination requests which behave significantly different than the current coordination control in a coordinated-actuated controller. The proposed new coordination method can handle both priority and coordination together to reduce and balance delays for buses and automobiles with real-time optimized solutions.The robust multiple priority control problem was simplified as a polynomial cut problem with some reasonable assumptions and applied on a real-world intersection at Southern Ave. & 67 Ave. in Phoenix, AZ on February 22, 2010 and March 10, 2010. The roadside equipment (RSE) was installed in the traffic signal control cabinet and connected with a live traffic signal controller via Ethernet. With the support of Maricopa County's Regional Emergency Action Coordinating (REACT) team, three REACT vehicles were equipped with onboard equipments (OBE). Different priority scenarios were tested including concurrent requests, conflicting requests, and mixed requests. The experiments showed that the traffic controller was able to perform desirably under each scenario.Finally, a unified platoon-based mathematical formulation called PAMSCOD is presented to perform online arterial (network) traffic signal control while considering multiple travel modes in the IntelliDriveSM environment with high market penetration, including passenger vehicles. First, a hierarchical platoon recognition algorithm is proposed to identify platoons in real-time. This algorithm can output the number of platoons approaching each intersection. Second, a mixed-integer linear program (MILP) is solved to determine the future optimal signal plans based on the real-time platoon data (and the platoon request for service) and current traffic controller status. Deviating from the traditional common network cycle length, PAMSCOD aims to provide multi-modal dynamical progression (MDP) on the arterial based on the real-time platoon information. The integer feasible solution region is enhanced in order to reduce the solution times by assuming a first-come, first-serve discipline for the platoon requests on the same approach. Microscopic online simulation in VISSIM shows that PAMSCOD can easily handle two traffic modes including buses and automobiles jointly and significantly reduce delays for both modes, compared with SYNCHRO optimized plans.