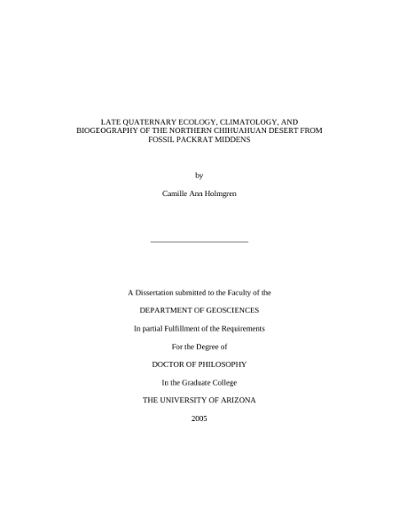 The northwestern Chihuahuan Desert along the U.S.A.-Mexico border contains a rich mosaic of vegetation with high levels of biodiversity. A conspicuous gap in packrat midden coverage, however, exists for this area and paleovegetation data is scarce. The focus of this dissertation is the reconstruction of late Quaternary ecology, climatology, and biogeography of the northern Chihuahuan Desert.A new packrat midden chronology from Playas Valley, NM is the first installment of an effort to reconstruct paleovegetation and paleoclimate in the U.S.A.-Mexico Borderlands. Plant macrofossil and pollen assemblages from nine middens indicate late Pleistocene vegetation along pluvial lake margins consisted of open pinyon-juniper communities dominated by Pinus edulis, Juniperus scopulorum, Juniperus cf. coahuilensis and an understory of C4 annuals and grasses. This summer-flowering understory, characteristic of modern desert grasslands, suggests at least moderate late Pleistocene summer precipitation. By 10,670 14C yr B.P. Pinus edulis and Juniperus scopulorum had become rare or disappeared. The late Holocene was marked by arrival of Chihuahuan Desert scrub as vegetation became modern in character. A 36,200 cal yr B.P. midden record was also developed from the Peloncillo Mountains along the Arizona-New Mexico-Mexico border. Between 36,200-15,410 cal yr B.P., rocky areas above playa lakes supported Pinus edulis, Juniperus osteosperma, Juniperus cf. coahuilensis, and Quercus turbinella. This site also supported summer-flowering C4 annuals and grasses, indicating abundant summer rains and relatively warm temperatures. After ~15,410 cal yr B.P., Pinus edulis declined in abundance and disappeared briefly at 13,925 cal yr B.P., coincident with other evidence for Bølling-Allerød aridity, and then rebounded briefly during the Younger Dryas. Few middens date from the early to middle Holocene, while 35 middens from the late Holocene detail increasingly aridity.Bioclimatic envelopes were also applied to packrat midden series from the USA-Mexico borderlands. Bioclimatic envelopes for C4 grasses indicate winter temperatures were no more than 4.5ºC colder than present and summer temperatures no more than 4.4ºC colder during late Pleistocene, while summer precipitation was reduced by no more than 50%. The appearance of many desertscrub species around 5000-4000 yr B.P. appears to have been due, at least in part, to increasing winter temperatures.