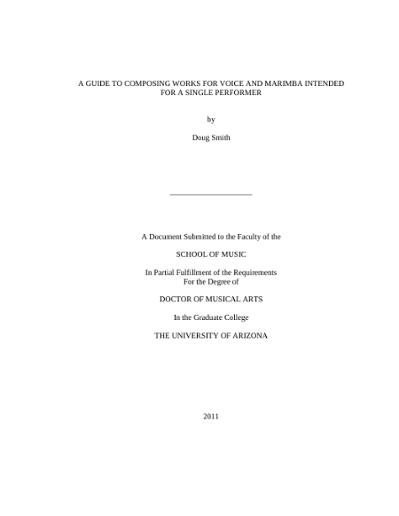 This research identifies successful compositional techniques for voice and marimba, intended for a single performer, through comparison of commissioned works composed by Beth Caucci, Philip Rothman, Emmanuel Séjourné, Raymond Helble, and Roger Foreman. The comparison highlights musical and technical aspects most effective when writing for this genre. My first personal experience combining marimba and voice occurred in January, 2003 during a performance of Šta Vidiš by Nebojša Živković. The piece, written in 1990, involves an ancient Serbian text chanted over a drone following an improvised introduction on the marimba. The performance’s positive reception inspired further exploration of this instrument combination. At the time of the performance, additional pieces for solo voice and marimba intended for a single performer were not available. Rather than focusing on transcription possibilities, I commissioned Four Songs by Beth Caucci. The premiere of Four Songs (October, 2003) resulted in another positive reception and led to inspiration for further commissions and development of this new genre. During the commissioning process, it became clear that a practical guide, concerning the possibilities and limitations of singing while playing the marimba, would aid composers in the creation of effective and playable works. Composers asked questions regarding technical aspects such as the maximum arm-span range possible, the difficulty of shifting the body angle to reach chords in various sharp and flat arrangements, and the feasibility of performing rapid passages on the marimba while sustaining a vocal line. This document offers an examination of these and other compositional considerations. The guide may also be used as a commissioning resource for other marimba and voice performers, as well as an aid in addressing technical demands of singing while playing the marimba. Recently, a few other percussionists have been working in the genre as well, including works performed, commissioned, or written by Brian Calhoon, Louise Devenish, Michael Neumeyer, and Dr. Lee Hinkle. The work of these musicians, in addition to my own commissions, is an illustration of how the genre has progressed during the last eight years and indicates the possibility of continued growth.