The Prehispanic Tewa World: Space, Time, and Becoming in the Pueblo Southwest 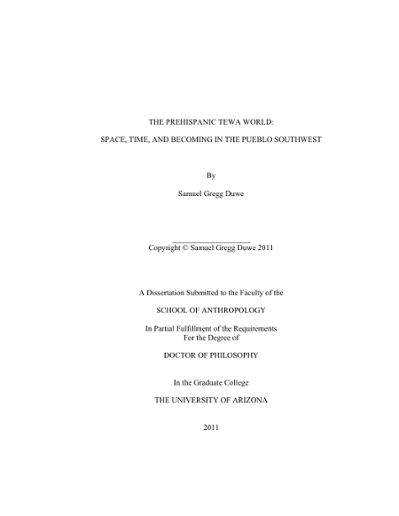 Cosmology -- the theory, origin, and structure of the universe -- underlies and informs thought and human action and manifests in people's material culture. However, the theoretical and methodological tools needed to understand cosmological change over archaeological time scales remains underdeveloped. This dissertation addresses the history of the Pueblo people of the American Southwest, specifically the Tewa of the northern Rio Grande region in modern New Mexico, to identify and explain cosmological change in the context of dramatic social and residential transformation.The Great Drought and resulting abandonment of much of the northern Southwest in the late-1200s acted as a catalyst for a complex reorganization of the Pueblo world as displaced migrant groups interacted with existing communities, including people of the Rio Grande region. I argue that this period of immigration, reorganization, and subsequent population coalescence of disparate people, with different world views and histories, resulted in a unique construction of the cosmos and, eventually, the Tewa identity and history that the Spanish encountered in the late 1500s. The resulting Tewa cosmology recorded in twentieth century ethnography, while heavily influenced by histories of conquest and colonization, is therefore a palimpsest of the memories, identities, and histories of disparate peoples brought together by the events of migration and coalescence.Using data collected from architectural mapping, pottery analysis, ceramic compositional analysis, and dendrochronology, I infer a history of settlement and interaction between and within possibly disparate ancestral Tewa groups in the northern Rio Grande region. I then interpret ritual landscape data with respect to cosmological change, focusing on natural and cultural (shrines and rock art) features immediately adjacent to the village.I argue that new cosmologies were developed through negotiation of worldview between disparate peoples displaced by the mass-depopulation of the northern Southwest. The ethnographic Tewa cosmology has roots in multiple traditions but is innovative and unique in the context of the larger Pueblo world. However, because the majority of the Pueblo world underwent similar residential, social, ritual, and cosmological transformation from A.D. 1275-1600, a Tewa case study has broad implications for the remainder of the Pueblo Southwest.