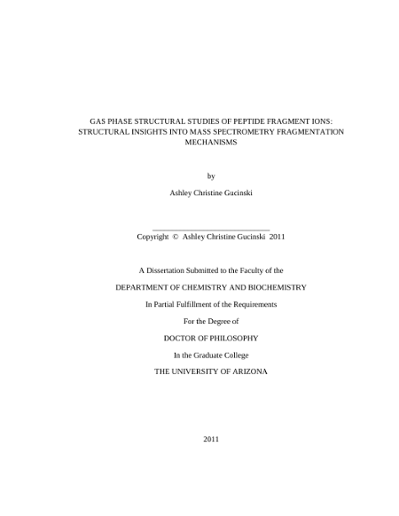 This dissertation presents extensive structural studies of gas-phase peptide fragment ions, with a specific focus on b₂⁺ ions. Fragment ion structures can provide important insights into peptide fragmentation mechanisms. Based on the structures formed, information about the preference of competing b ion formation pathways can be obtained. b₂⁺ ion structures are of interest because of their large relative abundances in MS/MS spectra, which are difficult to predict. Prior to this work, only a few b₂⁺ ion structures were determined; these systems featured only aliphatic residues and all formed oxazolones. The work presented herein examines the influence of basic, acidic, and backbone-attached sidechains on peptide fragmentation mechanisms, as revealed by the resulting b₂⁺ fragment ion structure(s) formed. Specifically, the structures of several histidine, aspartic acid, and proline-containing b₂⁺ ions are determined by using action IRMPD spectroscopy, fragment ion HDX, and DFT calculations. The structures of a series of histidine analogue-containing b₂⁺ ions reveal that the location and availability of the pi-nitrogen is essential for diketopiperazine formation. The histidine sidechain bulk or strain interferes with the complete trans-cis isomerization required for diketopiperazine formation, so the oxazolone structure is also present. Xxx- Pro b₂⁺ ions favor oxazolone formation with aliphatic N-terminal residues. HP favors the diketopiperazine, combining the histidine effect and the proline cis conformation propensity. For Xxx-Asp b₂⁺ ions, aspartic acid significantly influences b₂⁺ ion structure only with an N-terminal histidine or lysine; both HD and KD form a mixture of oxazolone, anhydride, and diketopiperazine structures, presenting the first spectroscopic evidence for the anhydride b₂⁺ion structure. The HA and AH b₂⁺ ions feature the same structures, but HP and PH do not, showing that residue position matters. Additionally, while relative intensities and HDX rates featured some fluctuation, peptide precursor composition differences did not alter the mixture of b₂⁺ ion structures formed for a given b₂⁺ ion. To complement existing gas-phase structural methods, the utility of a new technique, QCID-HDX-IRMPD, was applied to m/z 552.28 from YAGFL-OH. Both the standard b₅⁺ fragment ion and an isobaric non-C-terminal water loss ion are present. Without separation of these isomers, MS/MS spectral interpretation would be complicated.