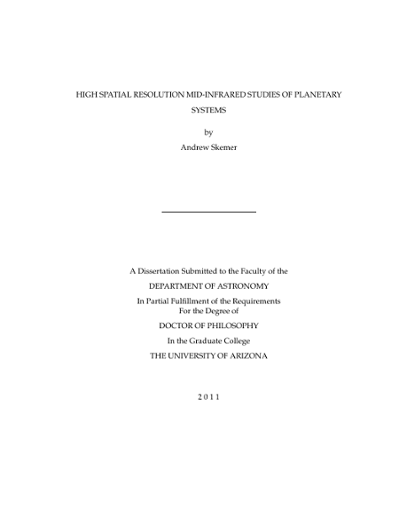 I present the results of six papers related the formation and evolution of planets and planetary systems, all of which are based on high-resolution, ground-based, mid-infrared observations.The first three chapters are studies of T Tauri binaries. T Tauri stars are young, low mass stars, whose disks form the building blocks of extrasolar planets. The first chapter is a study of the 0.68"/0.12" triple system, T Tauri. Our spatially resolved N-band photometry reveals silicate absorption towards one component, T Tau Sa, indicating the presence of an edge-on disk, which is in contrast to the other components. The second chapter is an adaptive optics fed N-band spectroscopy study of the 0.88" binary, UY Aur. We find that the dust grains around UY Aur A are ISM-like, while the mineralogy of the dust around UY Aur B is more uncertain, due to self-extinction. The third chapter presents a survey of spatially resolved silicate spectroscopy for nine T Tauri binaries. We find with 90\%-95\% confidence that the silicate features of the binaries are more similar than those of randomly paired single stars. This implies that a shared binary property, such as age or composition, is an important parameter in dust grain evolution.The fourth chapter is a study of the planetary system, 2MASS 1207. We explore the source of 2MASS 1207 b's under-luminosity, which has typically been explained as the result of an edge-on disk of large, grey-extincting dust grains. We find that the edge-on disk theory is incompatible with several lines of evidence, and suggest that 2MASS 1207 b's appearance can be explained by a thick cloudy atmosphere, which might be typical among young, planetary systems.The fifth chapter is a study of the white dwarf, Sirius B, which in the context of this thesis is being studied as a post-planetary system. Our N-band imaging demonstrates that Sirius B does not have an infrared excess, in contrast to previous results.The sixth chapter is a study of mid-infrared atmospheric dispersion, which in the context of this thesis is being studied as an effect that will limit the ability of ELTs to image planetary systems. We measure mid-infrared atmospheric dispersion, for the first time, and use our results to confirm theoretical models.