DESIGN, SYNTHESIS, AND CHARACTERIZATION OF HELICAL OPIOID GLYCOPEPTIDE AGONISTS: THE STUDY OF THE STRUCTURE-ACTIVITY RELATIONSHIP AND TRANSPORT OF GLYCOPEPTIDES RELATED TO BETA-ENDORPHIN AND DYNORPHIN 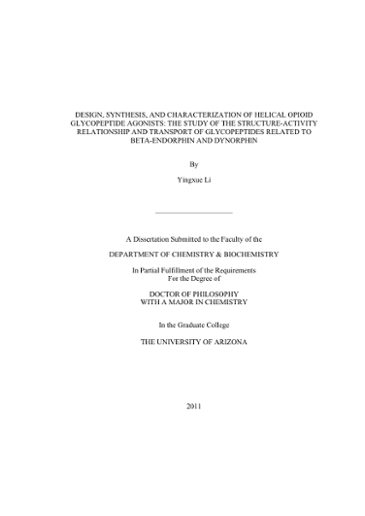 Structure-activity relationships (SAR) of opioid peptide analogues related to endorphin or dynorphin have provided rational and powerful approaches toward the design of peptide therapeutics. A series of glycosylated β-endorphin analogues were designed by modifying the N-terminal “message domain,” the C-terminal “address domain,” and the “linkage domain” between the two, and by altering the intrinsic helix stability of the amphipathic helix that comprises the “address domain.” Further changes were accomplished by altering the charged groups on the side chains of the “address region.” The unglycosylated peptide homologues and variations of the saccharide moieties (monosaccharides vs disaccharides) were also studied. The β- endorphin glycopeptide analogue ¹Tyr- ᵐD-Thr- ³Gly- ⁴Phe- ⁵Leu- ᴸPro- ⁷Asn- ⁸Leu- ʰAib ᶜGlu- ᶜLys- ʰAla- ¹³Leu- ᶜLys-¹⁵Ser[β-O-Glucose]- ¹⁶Leu-NH2, was modified at the indicated positions (m, h, c), and in collaboration with the Bidlack Lab at the Rochester Medical Center, binding affinities Kᵢ were measured using human opioid receptors expressed in CHO cells. All the peptides and glycopeptides were panagonists, showing low nanomolar affinity for the μ, δ and κ-opioid receptors. Helix stability was varied by substituting ʰAib, ʰAla, and ʰGly, which altered membrane affinity, which was correlated with helix stability. Charges on the address side chains were varied by substituting ᶜAsn, ᶜGlu, and ᶜLys. The 15Ser residue bore either a β- Lactoside, a β-D-glucoside or was unglycosylated. These peptides and glycopeptides were studied by circular dichroism (CD) and by 2D-NMR in H₂O buffer (pH = 5.5), in 30% trifluoroethanol in H₂O, and in H₂O containing SDS micelles as a model for biological membranes. In H₂O the glycopeptides and peptides showed only nascent helix behavior and random coil conformations. Chemical Shift Indices (CSI) and nuclear Overhauser effects (NOE) confirmed the helical nature of the “address domains” in the presence of SDS micelles (membrane mimics). Detailed backbone conformations were determined using distance constraints provided by NOE volumes. Based on the CD experiments, most of the β-endorphin analogues showed substantial amounts of helicity in the presence of membrane bilayer models. Several glycopeptides demonstrated penetration of the Blood Brain Barrier (BBB), and produced potent antinociceptive effects in mice after intravenous (i.v.) injection. The amphipathic address domain played a major role in BBB penetration, as reflected by the i.v. activities. The linker also had profound effects on the SAR, and it was possible to produce antinociceptive glycopeptides. In summary, we suggest that this biousian nature is essential for glycopeptides to maintain bioactivities, and the longer, more flexible linkages GABA and DAVA were able to mediate two interactions having lower energy, one interaction between the message segment and opioid receptor’s binding pocket, and another one between the address segment and the cell membrane, to result in higher binding affinities to all three opioid receptors, and significantly increasing analgesia after both i.c.v and i.v. administration. The cyclic linkers restricted D- and L-Pro on the orientation of message segment, relative to the membrane.