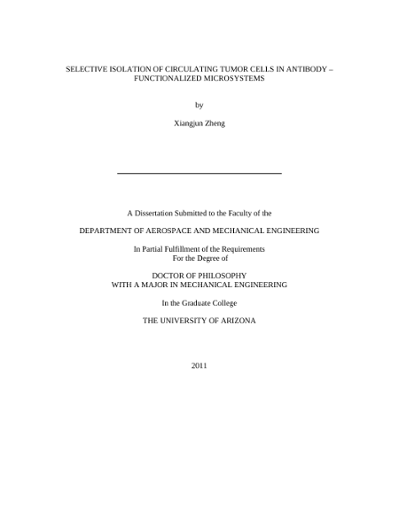 Attachment of circulating tumor cells in microfluidic devices functionalized with proper antibodies was studied. Under static experimental conditions, microchambers were utilized to study the parameters such as cell suspension concentration, incubation time or ambient temperature that may affect the binding of cell to the functionalized surfaces. Specific capture of cells from suspensions increases exponentially with incubation time and linearly with concentration within the tested range. Functionalizing a surface with counter-receptors enables capture of almost 100% of cells within 15 minutes incubation time at ambient temperature higher than 25°C. Suspending cells with different receptors, changing the counter receptors immobilized on the surface, or incubation the cell suspension at low ambient temperature result in a poor capture ratio. To illustrate the specific binding of target cells, various binary mixtures of target cancer and blood cells were incubated in the microchambers. The microsystem sensitivity, specificity and accuracy were determined as a function of the incubated cell concentrations. In general, the system specificity increases while the sensitivity decreases with increasing cell concentration; the accuracy of the system depends weakly on cell concentration within the tested range. The cell attachment dynamics in shear flow was studied by driving the MDA-MB- 231 or BT-20 cells through microchannels functionalized with EpCAM antibodies. The cell attachment ratio was experimentally determined at different flow rates. A modeling system based on Stokesian as well as cell-adhesive dynamics is adopted to analyze the cell motion. The cell motion is modeled as a rigid sphere, with receptors on its surface, moving under shear flow above a surface immobilized with ligands. The system is described mathematically by the Langevin equation, in which the receptor-ligand bonds are modeled as linear springs. Primarily depending on the applied flow rate, three distinct dynamic states of cell motion have been observed: free motion, rolling adhesion, and firm adhesion. The fraction of cells captured due to firm adhesion, defined as attachment ratio, depends on the applied flow rate with a characteristic value that increases with either cellreceptor or surface-ligand density. Utilizing this characteristic flow rate as a scaling parameter, all measured and calculated attachment ratios for different receptor and ligand densities collapse onto a single exponential curve. Binary mixtures of target MDA-MB-231 cells and non-target BT-20 cells were driven through anti-cadherin-11 functionalized microchannels to study the selective isoaltion of target cells from binary mixtures. The system sensitivity is very high, above 0.95, while the specificity is only moderately high, about 0.85, essentially independent of the relative concentration of the target and non-target cells in the binary mixture. An attachment/detachment flow field pattern is proposed to enhance the system specificity. Utilizing this flow pattern with a 1:1,000 MDA-MB-231:BT-20 binary cell mixture, the microfluidic system specificity increased to about 0.95 while the sensitivity remained above 0.95. In order to obtain high experimental throughput allowing lower relative concentration of target cells, a microchannel array which enables processing samples containing about 510⁵ cells with a minimum target cell concentration ratio of 1/100,000 was designed and fabricated. To demonstrate selective isolation of target cells, binary mixtures of BT-20 cells and MIA PaCa-2 cells were driven through microchannel arrays functionalized with EpCAM antibodies; the EpCAM positive BT-20 cells served as target cells and the EpCAM negative MIA PaCa-2 cells as non-target cells. The relative concentration ratio of target/non-target cells varied from 1:1 to 1:100,000. The sensitivity was close to 1.0 while the specificity was also high, about 0.95. The additional detachment step, with a faster flow rate, enhanced the specificity to about 0.985. Initial results of two sets of experiments are reported as preliminary studies for future work. In the first set of experiments, whole blood samples from healthy donors were spiked with a known number of BT-20 cells at a concentration of 500 CTCs per milliliter blood or 50 CTCs per milliliter blood. After a pretreatment to enrich the CTCs, the samples were driven through microchannel arrays functionalized with anti-EpCAM. For both samples, around 55% of the target CTCs were captured in the microchannel arrays. The second set of experiments was dedicated to characterization of target cells exposed to applied shear stress. BT-20 or MDA-MB-231 cells were driven through microchannels functionalized with EpCAM antibodies to allow target cell attachment; then, a high flow rate was applied to detach the captured cells. The detached cells were collected and cultured in an incubator to test their viability. For both cell lines, the majority of the captured CTCs collected from the microchannels were viable. The images taken after three and seven days of culture demonstrate continuous cell growth and division.