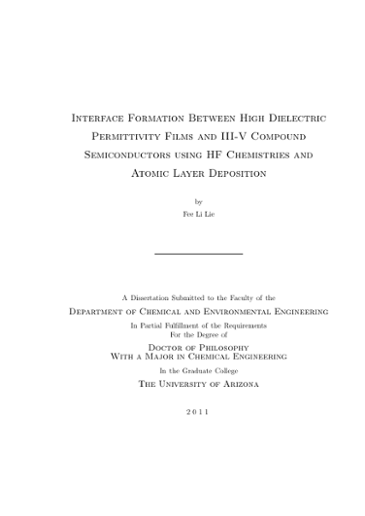 In-based III-V compound semiconductors have higher electron mobilities than either Si or Ge and direct band gaps. These properties could enable the fabrication of low power, high-speed n-channel metal oxide semiconductor field effect transistors (MOSFETs) and optoelectronics combining MOS technology with photonics. Since thermal and native oxides formed on III-V surfaces exhibit large current leakage and high densities of trap states, a key to incorporating these materials into advanced devices is the development of processing steps that form stable interfaces with dielectric layers. In this thesis, a processing flow consisting of native oxide removal using HF chemistries and deposition of high dielectric permittivity films using atomic layer deposition was investigated. Understanding the reaction mechanisms of these processes could provide the means of controlling composition and structure, yielding a desired electronic behavior. Quantitative X-ray photoelectron spectroscopy analysis of surfaces was coupled with electrical measurements on MOS capacitors of the interface quality in order to understand the nature of high-k/III-V interface defects and their repair. Ex situ liquid phase HF etching removed InSb, InAs, and InGaAs(100) native oxides and produced an Sb- or As-enriched surface, which oxidized when exposed to air. A 5 to 22 °A thick As- and Sb-rich residual oxide was left on the surface after etching and < 5 min of air exposure. The results showed that group V enrichment originated from the reduction of group V oxides by protons in the solution and the preferential reaction of HF with the group III atom of the substrate. A sub-atmospheric in situ gas phase HF/H2O process removed native oxide from InSb, InAs, and InGaAs(100) surfaces, producing an In or Ga fluoride-rich sacrificial layer. A 50 to 90% oxide removal was achieved and a 10 to 25 °A-thick overlayer consisting of mainly In and Ga fluorides was produced. The composition and morphology of the sacrificial layer were controlled by the partial pressure of H2O as well as the ratio of HF to H2O used. Water played a critical role in the process by directly participating in the etching reaction and promoting the desorption of fluoride etching products. Accumulation of thick fluoride layer at high HF to water partial pressure ratios prevented adsorption and diffusion of etchant to the buried residual oxide. When oxide was removed, HF preferentially reacted with In or Ga atoms from the substrate, enriching the surface with group III fluorides and producing approximately one monolayer of elemental group V atoms at the interface. Interface reactions occurred during atomic layer deposition of Al2O3, in which trimethylaluminum (TMA) removed surface oxides and fluorides. Chemically sharp InSb/Al2O3 and InGaAs/Al2O3 interfaces were achieved for gas phase HF-etched InSb and liquid phase HF-etched InGaAs. A ligand transfer mechanism promotes nucleation of Al2O3 and removal of III-V atoms from the sacrificial oxide and fluoride layers as volatile trimethyl indium, gallium, arsenic, and antimony. These reactions have been explained by the relative bond strength of surface and precursor metal atoms with O and F. Interaction of a InSb(100) surface with TiCl4 as a model for metal halide ALD precursors showed that similar ligand transfer reactions occured. Adsorbed chlorine from the dissociative adsorption of TiCl4 on the InSb surface at elevated temperature, however, preferentially etched In atoms from the substrate and produced a roughened surface. The quality of InGaAs/Al2O3 interfaces prepared by solvent cleaning and liquid phase HF were assesed electrically using capacitance-voltage and conductance measurements. Surface recombination velocity (SRV) values were extracted from the measurements to represent the net effect of interface defects, which includes defect density and capture cross section. The InGaAs/Al2O3 interface prepared by solvent cleaning consisted of interfacial native oxides while that etched in liquid phase HF consisted of submonolayer arsenic oxide. The two chemically contrasting interfaces, however, gave similar SRV values of 34.4±3.7 and 28.9±13.4 cm/s for native oxide and liquid phase HF prepared samples, respectively. This suggests that the presence or absence of oxides was not the only determining factor. Post Al2O3 deposition annealing in forming gas and NH3 ambient significantly improved the electrical quality for both surfaces, as shown by SRV values between 1 to 4 cm/s which is comparable to that of an ideal H-terminated Si surface. XPS analysis showed that the contribution from elemental As and Ga2O3 at the interface of both surfaces increased after annealing in forming gas and NH3, likely due to thermal or hydrogen-induced reaction between interfacial As oxide and Ga atoms in the substrate. There was no correlation between the atomic coverages of interfacial elemental As and oxides to the SRV values. High activity defects at III-V/Al2O3 interfaces are associated with interfacial dangling bonds which were passivated thermally and chemically by annealing in forming gas and NH3.