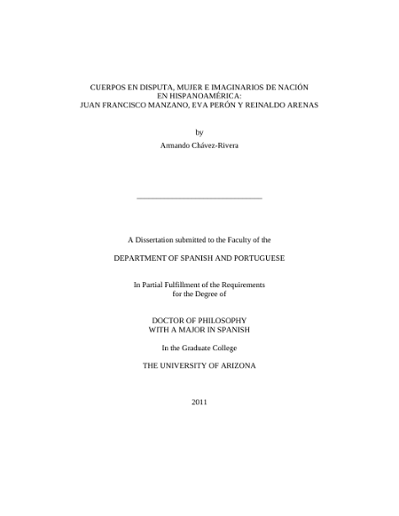 Cuerpos en disputa, mujer e imaginarios de nación en Hispanoamérica: Juan Francisco Manzano, Eva Perón y Reinaldo Arenas begins with the premise that the values and requirements of a patriarchal society focuses on female icons of symbolic strength and weight. As icons, women are associated as being the center of the monogamous, heterosexual family and therefore, the image of Nation. In Latin America each hegemonic national project has elevated female icons that are a compact synthesis of that nation's essential and defining values. From that idea our research expands to examine how those hegemonic national discourses and imageries are refuted in the nineteenth century through other antagonistic discourses, each in turn putting forward other paradigms of women or other bodies on the literary plane. These test gender issues, sexuality and morality, and the authorized bodies of Woman/Nation are contrasted with other discordant, subversive, fictional faces. Our objective is to discover these images of rebellion, and evaluate the literary, political and ideological dialogue that has been established through these hegemonic female icons.In this sense, the discourses related to Manzano, Evita, and Arenas, three representative figures of diverse successive historical stages within the region throughout the nineteenth and twentieth centuries --from colonial slavery, populism and communism, to the postmodern-- corroborate that, in effect: Protests and revolutions have presented their own icons of woman or other subversive or discordant bodies in the face of female paradigms set by those in power.The theoretical and critical apparatus is based on the contributions of feminist criticism on women in literature, art and Latin American politics (Helena Araújo, Hélène Cixous, Lucía Guerra-Cunningham, Josefina Ludmer, Francine Masiello and Elaine Showalter), and studies on the links between sexuality, power and society (Judith Butler, bell hook, Michael Foucault, Edward Said and G. Ch. Spivak), as well as research on the formation of societies and national imagery in Latin America since the early nineteenth century (Mabel Moraña, Walter Mignolo and Ángel Rama), all of which is framed in the context of literary and aesthetic movements from neoclassicism to post-modernity.