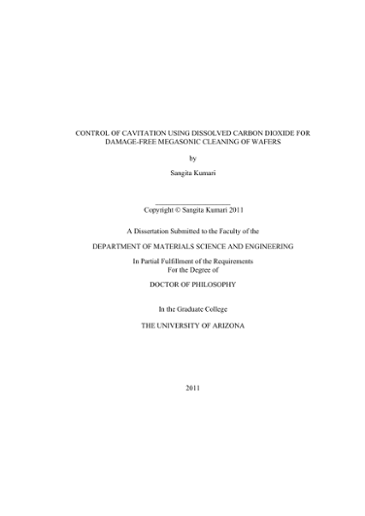 This dissertation describes the finding that dissolved carbon dioxide is a potent inhibitor of sonoluminescence and describes the implications of the finding in the development of improved megasonic cleaning formulations. Megasonic cleaning, or the removal of contaminants particles from wafer surfaces using sound-irradiated cleaning fluids, has been traditionally used in the semiconductor industry for cleaning of wafers. Recently however, advancing technology and miniaturization has made wafer features increasingly susceptible to damage by megasonic energy. International Technology Roadmap for Semiconductors (ITRS) 2011 predicts the critical particle diameter, critical particle count and killer defect numbers to be 22 nm, 113 #/wafer and 4.3 #/mm², respectively, on a 300 mm wafer for 45 nm technology node. A critical challenge in the field, therefore, is to achieve removal of small particles (22 nm to 200 nm) without causing damage to fine wafer features. The work described here addresses this challenge by identifying sonoluminescence and solution pH as two key factors affecting damage and cleaning efficiency, respectively and establishing novel means to control them using CO₂(aq) release compounds in the presence of acids and bases. Sonoluminescence (SL) behavior of the major dissolved gases such as Ar, Air, N₂, O₂ and CO₂ was determined using a newly designed Cavitation Threshold Cell (CT Cell). SL, which is the phenomenon of release of light in sound-irradiated liquids, is a sensitive indicator of cavitation, primarily transient cavitation. It was found that all the tested dissolved gases such as Ar, Air, N₂ and O₂, generated SL signal efficiently. However, dissolved CO₂ was found to be completely incapable of generating SL signal. Based on this interesting result, gradual suppression of SL signal was demonstrated using CO₂(aq). It was further demonstrated that CO₂(aq) is not only incapable but is also a potent inhibitor of SL. The inhibitory role of CO₂(aq) was established using a novel method of controlled in-situ release of CO₂ from NH₄HCO₃. ~130 ppm CO₂(aq) was shown to be necessary and sufficient for complete suppression of SL generation in air saturated DI water. The method however required acidification of solution for significant release of CO₂, making it unsuitable for the design of cleaning solutions at high pH. Analysis of the underlying ionic equilibria revealed that the loss of released CO₂(aq) upon increase in pH can be compensated by moderate increase in added NH₄HCO₃. Using this method, simultaneous control of SL and solution pH was demonstrated in two systems, NH₄HCO₃/HCl and NH₄OH/CO₂, at two nominal pH values; 5.7 and 7.0. Damage studies were performed on wafer samples with line/space patterns donated by IMEC and FSI International bearing Si/metal/a-Si gate stacks of thickness ~36 nm and Si/Poly-Si gate stacks of thickness ~67 nm, respectively. A single wafer spin cleaning tool MegPie® was used for the generation of megasonic energy for inducing damage to the structures. It was demonstrated that CO₂ dissolution in DI water suppresses damage to the gate stacks in a dose-dependent manner. Together, these studies establish a systematic and strong correlation between CO₂(aq) concentration, SL suppression and damage suppression. Significant damage reduction (~50 % to ~90 %) was observed at [CO₂(aq)] > ~300 ppm. It was also demonstrated that CO₂(aq) suppresses damage under alkaline pH condition too. This demonstration was made possible by the successful design of two new cleaning systems NH₄HCO₃/NH₄OH and CO₂/NH4OH that could generate CO₂(aq) under alkaline conditions. Damage suppressing ability of the newly designed cleaning systems were compared to the standard cleaning system NH₄OH at pH 8.2 and it was found that NH₄HCO₃/NH₄OH and CO₂/NH₄OH systems were 80 % more efficient in suppressing damage compared to the standard NH₄OH cleaning system. Finally, megasonic cleaning studies were conducted in the same single wafer spin cleaning tool MegPie®, using SiO₂ particles (size 185 nm) deposited on 200 mm oxide Si wafers, as the contaminant. It was found that the standard cleaning chemical, NH₄OH, pH 8.2, was effective in achieving > 95 % particle removal for 2 min irradiation of megasonic energy at power densities > 0.7 W/cm². Based on these results, a new system, NH₄HCO₃/NH₄OH, was designed with an aim to release ~300 ppm CO₂ at pH 8.2. It was demonstrated that newly designed system NH₄HCO₃/NH₄OH, allowed significant suppression of damage in comparison to NH₄OH while maintaining > 90 % cleaning efficiency that was comparable to NH₄OH solution, at the same acoustic power densities. Taken together, these studies establish a potent and flexible means for the inhibition of SL generation over a wide pH range and acoustic power densities and demonstrate its use in suppression of wafer damage without compromising megasonic cleaning efficiency.