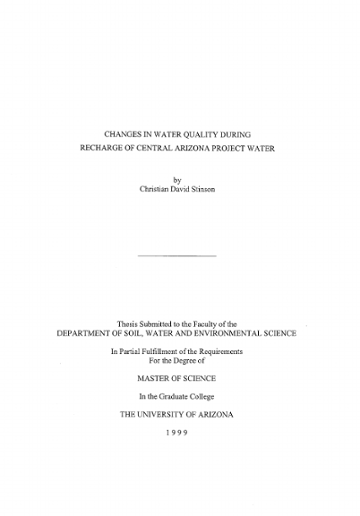 The purpose of this investigation was to observe water quality changes of Colorado River water recharged on retired agricultural fields in Avra Valley, near Tucson, Arizona. The research site was at the Central Avra Valley Storage and Recovery Project, CAVSARP, located approximately 20 miles west of the City of Tucson. During the period of observation, CAVSARP was composed of three 20-acre pilot recharge basins. Eventually, the recharge facilities are scheduled to be expanded to accept 60,000 acre-feet of Colorado River water annually. Water was transported to the site via a pipeline from the Central Arizona Project, CAP, aqueduct. The period of this study was from November 1997, until October 1999. Water quality parameters were measured at the surface, prior to recharge, at depth in the vadose zone and at the groundwater table. The principal parameters monitored were: pH, conductivity, temperature, total dissolved solids, total organic carbon, alkalinity, barium, bromide, calcium, chloride, fluoride, magnesium, nitrate-N, potassium, sodium, sodium adsorption ratio, and sulfate. Recharge of CAP water began in November 1997. Water samples were collected for analysis from perched layers in the vadose zone and at the watertable. The changes in water quality in the vadose zone were compared with those observed in laboratory bench-scale soil columns with similar composition. Bromide, chloride, and nitrate-N were flushed from the formerly cultivated agricultural fields to the watertable causing a rapid increase and then a decrease in concentrations at the watertable. Concentrations of barium and calcium were significantly higher than either the recharged water or the pre-recharged watertable were attributed to the dissolution of minerals in the soil profile by the percolating water. Total organic carbon was delayed in its arrival at the watertable by perching layers and continued to increase in concentration at the end of the observation period. The change in the concentrations of other constituents could largely be explained by the mixing of the recharged CAP water with the natural watertable water below the recharge basin. The field observations of the changes in water quality in the vadose zone were similar to those observed in the bench-scale soil column studies. Further monitoring is required to verify the continuance of the trends observed in this study.