Complex Verbs and the Lexicon 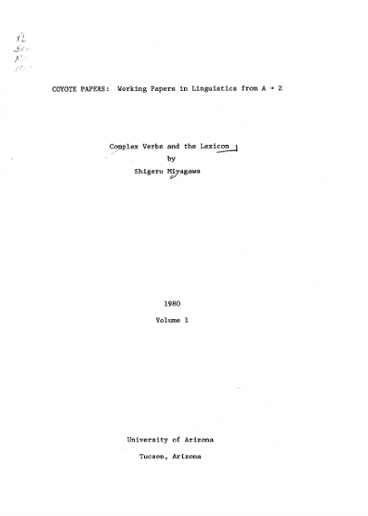 At the stage in the development of generative -transformational grammar when the primary emphasis of research was on the syntactic analysis of sentences, morphology was largely ignored, and the lexicon was simply viewed as an unstructured list of lexical items. However, Chomsky's Lexicalist Hypothesis brought about a renewed interest in word formation, and it is now clear that "the lexicon has a rich, internal structure. In this thesis we will apply the Lexicalist Hypothesis to Japanese, a non -Indo- European, agglutinative language. The analysis presented will be referred to as the "lexical analysis." Two major theoretical issues face the lexical analysis of Japanese. First, it attempts to provide an alternative framework to the transformational analysis that has dominated Japanese linguistics for the past fifteen years. With emphasis on sentences instead of words, the transformational analysis, in a sense, "deagglutinizes" morphologically complex verbs made up of a verb stem and one or more bound morphemes, e.g., V-sase-rare-ta-gat-ta 'V-cause-passive-want-appear- past'. A complex underlying structure is postulated for a sentence with such a verb, with each of the morphemes acting as "higher" verbs in the structure. In the transformational analysis, the fact that the morphemes combine to form a word seems almost incidental. The lexical analysis starts with the assumption that a complex verb comprises a single word that is formed in the lexicon. This forces us to look at Japanese in a different light, as a language with fairly simple phrase structure, and virtually no transformations (if any), but with a rich, highly structured lexicon. This view is closer to the original intuition that Japanese is an agglutinative language. The second theoretical issue concerns the theory of the lexicon. The Lexicalist Hypothesis has been worked out mainly for English, a nonagglutinative language. Since a primary concern of the Hypothesis is with words, it makes sense to test it using a language such as Japanese that has rich and varied word formation processes. The lexical analysis of Japanese draws from major works on the lexicon in English, but because of the highly agglutinating nature of Japanese, we find it necessary to reject, alter, and extend various aspects of lexical analysis of English. The goal of the lexical analysis is to define organizations within the Japanese lexicon. Two types of organizations the lexical analysis focuses on are (a) content and ordering of rules that apply within the domain of the lexicon, and (b) arrangement of verbs, both simple (i.e., verb stem) and complex, listed in the lexicon. Regarding (a), word formation rules akin to those proposed by Aronoff bear the responsibility of forming complex verbs in Japanese; and "redundancy rules" assign rule- governed, i.e., "regular," case arrays to the NPs in the subcategorization feature of verbs. Idiosyncratic case marking is either attributed to a particular lexical item -- verb -specific case marking --or assigned by a rule with a limited scope (Marked-Case Specification Rule). As for (b), the lexicon imposes an organization on all listed verbs by providing slots within "paradigmatic structures." Verb stems automatically receive a slot, and thus they are the most basic verbs, while complex verbs formed by word formation rules can only enter an appropriate slot if the slot is not already occupied by a more basic lexical item, usually a verb stem. If a complex verb can occupy a slot, it receives a lexical entry and becomes part of the permanent lexicon. These verbs undergo lexical processes such as semantic drift and nominalization commonly attributed to the basic verb stems. It is hoped that the lexical analysis of Japanese presented in this thesis will be a model for other agglutinative languages. As a way of illustrating this possibility, Turkish, Mitla Zapotec, and Navajo are briéfly considered in light of the lexical analysis of Japanese. While all of these languages share virtually the same components within the lexicon, a slight difference in the arrangement of the components leads to the difference in the morphological characterization among the languages.