FORTUNATE SONS OF THE MEXICAN REVOLUTION: MIGUEL ALEMÁN AND HIS GENERATION, 1920-1952 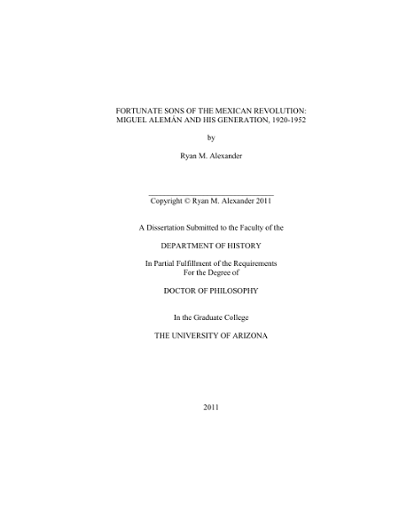 Miguel Alemán, who in 1946 became the first civilian president to represent Mexico's official revolutionary party, ushered into national office a new generation of university-educated professional politicians. Nicknamed the "cachorros (puppies) of the revolution," these leaders were dismissed as slick college boys by their opponents. Despite this objection, the rise to power of this new cadre represented a major turning point in the nation's political history. The prior ruling generation, composed of military officers who had faced calamitous violence during the Revolution, had carried out a decades-long social program that sought to address social-economic inequalities, redistribute resources, and draw previously marginalized groups into a politically, culturally, and ethnically unified nation. The members of the Alemán administration, by contrast, dedicated federal resources to promoting industrial development by implementing protectionist measures and constructing massive public works. Powerful hydroelectric dams and expansive irrigation networks supported large-scale commercial agriculture, while ambitious urban projects, including modernist housing complexes, planned suburbs, and the sprawling University City, symbolized the government's middle-class orientation. Despite these advances, their program came with high social costs: suspended redistributive policies and suppressed political liberties led many to accuse them of abandoning the legacy of social revolution they had inherited, an accusation bolstered by rampant corruption. While their policies fomented impressive economic growth over the next three decades, their focus on urban industry ultimately contributed to a debt crisis and a capital city overburdened by rapid inward migration. This controversial policy agenda and ambivalent legacy reflected their collective social formation. Their experiences as politically active students and as career politicians inculcated a sense of pragmatism that set them apart from their military predecessors. Once in office, Alemán and his colleagues exploited the geopolitical circumstances of the early Cold War period to solicit foreign loans as well as private investment, especially from the United States. These leaders fashioned a new image of the ruling Institutional Revolutionary Party (PRI). Carlos Denegri, a journalist during the Alemán years, captured the essence of this transformation best: "The Revolution," he lamented, "has gotten off its horse and into a Cadillac."