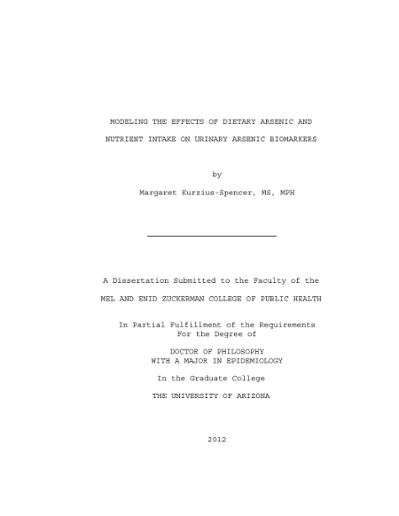 Background: Arsenic (As) is a naturally-occurring element with known toxicant effects. The primary exposure pathway is through ingestion, but the overall contribution of food versus water and the impact of specific dietary nutrients on urinary As excretion is not well understood. Methods: Secondary analyses of laboratory results from food, water and urine samples, questionnaire and anthropometric data, and dietary records were performed on four study populations: the National Health Exposure Assessment Survey (NHEXAS)-Arizona, Arizona Border Survey (ABS), the Arizona sub-group of the Binational Arsenic Exposure Survey (BAsES), and the 2003-2004 National Health and Nutrition Examination Survey (NHANES). Dietary As intake was measured in duplicate food samples and/or modeled from dietary records for each population using the U.S. Total Diet Study (TDS) arsenic residue database and a published market basket survey. Urinary total As, As⁵, As³, monomethylarsonic acid (MMA), and dimethylarsinic acid (DMA) were analyzed, and sum of species As was calculated as the sum of As⁵, As³, MMA and DMA. Regression analyses modeled the relation between urinary As biomarkers (total, sum of species, MMA:sum of species, and DMA:MMA) and dietary As, adjusted for drinking and cooking water As intake, current smoking, sex, age, ethnicity, body mass index, and nutrient intake. Results: Modeled dietary As based on TDS mean As residue data greatly underestimated exposure as compared with measured As in duplicate diet samples and estimates based on other residue data. Dietary As was a significant predictor of urinary total As in all four populations, of sum of species As in both BAsES and NHANES, and of %MMA and DMA:MMA in NHANES. Dietary protein intake was associated with decreased sum of species As in both BAsES and NHANES, but dietary folate was not. Conclusions: Dietary As contributes a markedly greater proportion of total ingested As and is a better predictor of urinary As than water As intake in the U.S. Among subjects who did not consume seafood, total As exposure from food and water exceeded the provisional tolerable daily intake of 2.1 µg/kg body weight/day in 3-15% of these study populations. Increased protein intake may mitigate the effects of As.